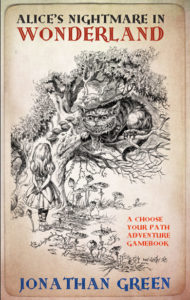 YOU become Alice, and Wonderland is in trouble. In the five years since her famous Adventures, the Queen of Hearts has been festering , creating paranoia, terror, and emotional complexes. Alice has been called back into Wonderland to stop her, before Wonderland collapses into a complete psychotic break… taking Alice’s mind with it!

Can an 11-year-old child revisit a dream she had when she was 7, assassinate the queen, and restore sanity to herself and the world within?

This is truly a great book, and I highly recommend it for gamebook enthusiasts as well as folks new to the concept.

The writing is great stuff, very atmospheric and descriptive, and there’s so much of it (800 paragraphs).

The illustrations are excellent, reflecting the gruesome and mentally disturbed nature of the nightmares that Alice is encountering. The adorable white rabbit and goofy Mad Hatter are zombie/golem/machine things that defy description, but that Kev pulls off remarkably well.

And again, the sheer volume of content here means that you’ll replay this book a dozen times finding everything. It’s hours and hours of good times.

If I had any complaint, it’s that the game balance is heavily skewed in favor of the player, so it’s nearly impossible to be injured in combat and you’ll only lose/die in a cut-scene option. My impression is that the book is intended to be won easily, instead of treated like a serious game where losing is part of the process. The balance issues in my opinion are:

But don’t let that turn you off. Accept a limit of 5 items in the pocket and 20 max endurance, or maybe fewer skill points, and you can easily get back into enjoying the excellent writing and bizarre adventure in Wonderland.

The scissors in the rabbit hole are equivalent to the bread knife later, and to the Ace of Clubs’ axe. That just seems off, and also means that there is no point in any later weapon. Also, if the axe does 3 damage in the hands of a child, shouldn’t it have done at least 3 points per hit when the Ace of Clubs was fighting Alice?