Another crawl Beneath Nightmare Castle (do over!) – Part 1 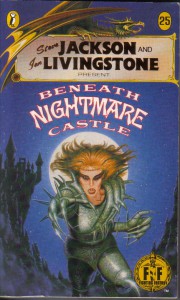 So, I went to re-play Beneath Nightmare Castle and I lasted ONE STINKIN’ PAGE before I was overpowered and sacrificed to some horrible god or another. Totally weak, man. I’m gonna cheat here. Let’s rewind that dark adventure music soundtrack I was playing, and just go back and pick that other option.

An Unpleasant Un-Welcome Into Town

I start off tied up and blindfolded in a cellar. After that unidentified voice cuts me free, I take off up the stairs. I find my loot, and take a look outside. The town is deserted, which is really weird. Time to get out of here. The door is locked so I slam into it with all my weight… my stamina + skill were 28, and I rolled exactly a 28 so oof! oh damn, that hurt.

The noise attracts a small horde of guards, and I have a significant fight on my hands. They’re completely unskilled, though, and one of them gets in a few good hits bringing me to 13 stamina before it’s all over. I step over a pile of bodies, and decide to get some dinner and sleep.

The atmosphere in the town is weird, with folks hurriedly barring their doors and windows and the tavern closed at dusk. I talk my way inside, and as I eat some dinner I decide to name-drop and see what I can find out. I mention that the margave and I were old friends, and the barkeep offers me some “special brandy” Yeah, I don’t think so, dude. I take it back and admit that I was joking, and go to bed. My sleep is disturbed by some sort of animal at the window, but between dinner and bed and breakfast I’m fully healed again. (don’t you wish all FF books would give you 6 stamina for a good evening and morning?)

I’m in town to visit the margrave (I wasn’t lying that we’re old friends) but it’s still early so I decide to check out the market. First thing, I am pickpocketed or pickedpocket or pocket-picked or whatever you call it — my money’s gone! You know, Port Blacksand was a rough place but so far Neuberg completely sucks. I’ve been here about 16 hours, and already been beaten unconscious, sacrificed to some nameless god, probably almost roofied, and now burgled.

This stinks, because I remember from a previous play that I need both halves of a trident or spear, and that one of them was at a junk peddler here in town. No money, no spear, no hope. So now I just live my life until I die, and try to enjoy the ride.

I test my luck and manage to shoplift a meal’s worth of food from one of the vendors. That wasn’t a very good move, since my luck was only 7 to start with and now it’s a 6.

Now that I’m broke, I decide to continue my tourism by simply seeing the sights. So I head to the temple district, and it’s everything I thought it could be. Large temples and small ones, ancient ones and newer ones, and a priest who pulls a knife on me but that’s okay because he’s the one who freed me from the cellar way back on page 1. He’s got an intense demeanor to him, but I kind of like that in priests who rescue me.

He makes me a lunch and loads me up with to-go boxes as well, so I’m well stocked for food. Then he tells me the bad news: Neuberg Keep was built on the entrance to an underground tomb of an evil mage, and the margrave thought it would be cool to dig it up for a look-see. Now the wizard is waking up, and they need a hero to kill it before it grows in strength. It’s the usual Fighting Fantasy sort of scenario, right? Problem is, I know that I’ve already lost because I couldn’t buy that spear-head, so I’m just along for the ride.

Lastly, he wants to bless me before I go, and that’s done by having me climb a tree. I pass the test of stamina + willpower and aaaah! angels sing and I get a +1 to my stamina and willpower. Hey, that’s nice.

Then he kicks me out, tells me to hit up the marketplace for the magic spearhead… but without giving me any money. So, yeah, that’s not gonna happen.

I head directly for Neuberg Keep (which, despite the book’s name the locals do not call “Nightmare Castle”), and take a side path into an abandoned garden adjacent to the wall. The wall is in poor condition, with a hole in it large enough for me to climb in and with the floor collapsed so I can crawl downward into the cellar. I am asked to test my luck, and remarkably I pass it (I had a 6) but I’m increasingly concerned because that means my luck is now 5. However, there’s nothing useful here: only a pool full of mud oh my god and tentacles and it’s coming right for me. I scramble away and back up into the garden. Let’s try a different entrance.

The other tower has a lot of garden compost, a glowing green orb that radiates heat (the holy hand grenade of Antioch!), and a surprising number of spiders. They bite me pretty badly before I make my way out… and back into the stinkin’ garden. Finally, the third tower has a door. Inside the door I am ambushed by an ogre, but he proves no trouble at all to kill. The next door into the tower is locked securely, and I am given the very unusual option of yelling “I’ve killed the ogre, it’s okay” So, let’s try that.

The door opens and the dwarf inside introduces himself as the gardener. He’s been trapped in here for ten weeks, he says, and is kind of ticked off about it. He’s really displeased with the leadership here, too, and he shows me a secret passage down into the cellars. And I am finally Inside Nightmare Castle.