The Seven Serpents is just ripping me up! Tonight was my third attempt, and it was more brief than the previous ones.

Our doughty  adventurer starts off in the usual fashion, bored and slightly sunburnt and attacked by giant birds on page 1. So, it’s basically hiking as usual here on Earth.

I fight them easily, not taking a scratch but becoming slightly bored, until a giant golden eagle swoops in and scares them away. It also drops a letter for me, my mission briefing from the king of Analand. (do you suppose the owls at Hogwarts appreciate this sort of invasion into their courier/delivery schtick? I expect not)

The king warns me that my mission has been discovered, that that I will need to face Seven Serpents here in the desert, or else they’ll have a trap for me when I get to book 4. But it’s okay — the Seven Serpents are bound to gods and have super badass powers, so I’ll be fine. Hm, wait…

As I’m pondering this good news during my walk, I’m interrupted by a talking tree. It tells me that the hermit I should talk to, lives nearby. I roll my eyes and keep walking, because I do not take advice from trees! The rest of the day passes uneventfully, as I set up camp and sleep, but then lose 3 stamina because I wasn’t allowed to eat while camping. (I have four bags of s’mores stuff too!)

Day Two of my journey starts off hungry and also kind of ticked off from sleeping on rocks. So when three centaurs come at me, I let them have it. They get me with an arrow for 3 more points, but I just slaughter them after that. They were even carrying some spell reagents, so they must have been thieves anyway and surely deserved it. (yeah, there was no campfire coffee either; I am in a really bad mood) 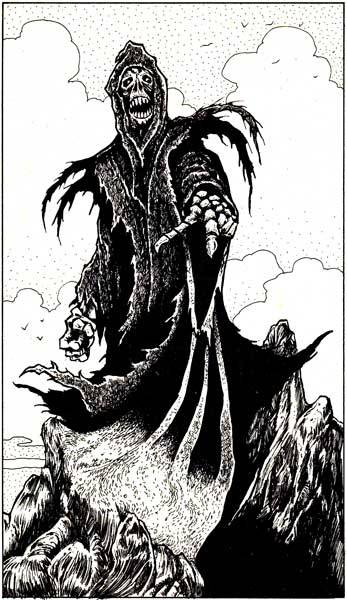 I continue walking northward, still stubbornly refusing to eat for whatever reason. Suddenly, the ground gives out under me! I’m attacked, by a giant acid-spitting beetle! Between its sharp claws and acid attack, I’m in really bad shape by the time I put him down — 5 stamina left.

So when I start hallucinating, and the sky and air darken around me, and a death wraith manifests itself, I am really not prepared. The book offers me the option of hiding, running, or fighting. As we know, running and hiding are never allowed; they just hit you for X damage then force you to fight anyway. So I whip out my bow and silver arrows that I picked up in Khare…

…and die fair and square in combat, against a worthy foe.

<< Next: Stranded by the Lake… Forever
Previous: Death by Earth Serpent, a brief tale of crossing the Baklands >>