Destruction of the Tower

I’ve played ToD a few more times, but since it’s the same tundra and ice castle as I’ve described a few times, I didn’t bother writing it up until I got some somewhere new. So, welcome! You’ve caught me mid-way through the adventure: I have just landed on an unguarded walkway on the Tower, and am about to begin sneaking through.

It’s been a pretty min-maxed run so far: I got the magical ice sword +2 and did a lot of honorable stuff so I could get a reward of having my stamina raised to 25. I have about 40 points’ worth of healing potions, and a stone jaguar that will fight for me. So I’m feeling pretty good about my chances. 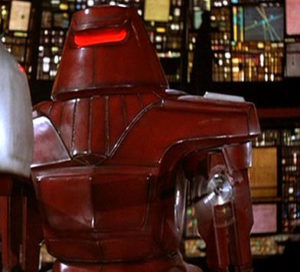 A flying robot in zero-g, big on enforcing No Trespassing orders? That’s my schtick, bub.

I creep down the walkway. I have vague memories from a past life of what’s inside the doors here. Being ripped apart by faceless horrors, infinite wave after wave of claws and teeth… shudder I keep walking. I come to a set of stairs and head up.

I find myself in a spherical chamber, with no gravity, and a floating stone golem is coming at me! So we engage in a zero-g floating swordfight (woohoo!), which sounds super awkward but also super fun… but also shreds me up pretty badly. I rest for a moment and pound back some healing brandy.

Got a good buzz going now.

I cross the room to a landing with two passageways. The main one ends in a darkness that is obviously magical, since my lantern can’t illuminate it. I have a bad feeling about that, so I go the other way. I wind about in some regular darkness for a while, and push my way through some mildly poisonous spider webs, and find myself in…

…some sort of gigantic golem-driven fire and blood vortex. Seriously, if this book had a sanity or fear mechanic this would be worth a roll. Four gigantic golems, are pouring hundreds of gallons of blood per minute, into a magical fire.

It’s so hideous and marvelous and terrible and beautiful, that I stand slack-jawed, and don’t notice the wizard who hucks a lightning bolt at me. It hurts badly, and I’m down to about half health, but there’s my target now: Zeverin the sorceror.

I have been saving the Wand of Cold for him, and bazow! he screams as the snowflakes rip through him. It did him 8 points and he has 5 left.

Thinking quickly, I remember that my crossbow has magical ice bolts. It’s a combat roll here (minus my +2 sword of course, just my 11 skill) and whew I make the hit for 4 more damage, leaving him 1 left. I’m allowed to do it again and… down he goes.

The wizard is dead, and I didn’t take a scratch. 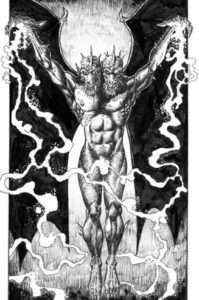 But the tower is still flying and throwing fire at the ground below. If Zeverin isn’t controlling this thing, then who is? Oh hell, I remember what Aliades told me: Severin made this thing in conjunction with the demons of hell, and I bet they’re the ones really in charge. I hear something booming down the hallway toward me, something … big.

Then come waves of death, averted by items found in my scavenger hint.

Tasrin’s ring, absorb most of the fire breath and I take 6 damage!

Magical ice bird, get in the demon’s face for a brief moment and distract it. Oh dang, that did not end well for the bird. Sorry about that. But, the bird did buy me time to chug that akvavit that I picked up from the barbarians. It heals 5 damage (24!) and gives me +1 skill for my next fight.

Hack! Slash! Claw! Fire! Shriek!  And it’s over… victory against the demon. It’s over. We’ve won.

With a sickening lurch, the tower begins to drop out of the sky. With a deafening roar, the magical fires break out of their containment and rush into the room. I run for it. I take some burns and inhale some smoke, but frantically find my way to an evacuation room where people are putting on some magical harnesses and jumping off of the Tower. Sounds good to me! I strap in and jump.

This is a mind-boggling vision, of the frozen ground below me, and the tower falling above me, of the wizard’s minions also falling from the sky ahead of me and behind me. It’s brilliant, and chaotic, and breath-taking. As I pick myself up off the ground from my surprisingly safe, albeit ungraceful, landing, the Tower “completes the terminal phase of its descent” as they say. It smashes against the side of a mountain, disintegrating into rubble and flames.

Uhm… wait. There’s more. Seriously? A robed figure is striding toward me, and from the gait it looks kind of angry. How many times will I have to kill this damned wizard?

I chug a healing potion. I cast a Luck spell on myself. I pound that potion of speed so I get double attacks for 3 rounds…

But it’s for nothing. As Zeverin approaches, the spirit of Elokinan appears from the ice sword, and imprisons Zeverin with a magical wave of his hand. The ice elves finally have their revenge on the evil wizard who destroyed their civilization, and who would have destroyed all of Titan.

My next adventure will be a hot shower, a good meal, and a long night’s sleep. But this adventure, ends here.