Part 4 of my playthrough of Freeway Warrior 3: The Omega Zone. We were closing in on the convoy, but the combined biker-bandit gang was closing in on us. We were forced onto the wrong highway, and we wrecked our car to throw off pursuit. It seemed to work, but there’s a sniper on our tail, and only two of our troupe of four are still alive. We escaped into the forest, and came across someone living here, hunting small game for food. I shouted a “hello” to him, and he took off running. Let’s harass and stalk this probably peaceful dweller in the mountains, and see if we can get some information out of him.

He gets to the door of a log cabin, and bang yelling for someone to let him in. Someone does, and as he enters we see that the logs are a front, that it’s really a bunker-grade door and wall. Not surprisingly, when we bang on the door they do not let us in.

And *BANG!* goes the sniper’s rifle again. Damn! Knott notices that the air vent is just a boarded up window, and isn’t nearly as thick as the walls and door. He smashes his way through it, and we clamber inside to safety. At least, a temporary safety.

It’s a food pantry, and is well-stocked. But it has a clear view of the window now, so it’s best to keep moving. We make our way down the hallway, and find a locked door with a spyhole. The man was speaking to someone, but he goes silent when he hears us outside. We smash down the door, absolutely determined to be friendly to these people no matter whether they want to be friendly or not!

We find them in a cellar underneath this main area, and we finally convince them to come out and talk. We tell our story, and they want no part of it. They live alone so they don’t have to deal with people like us, and now that we’ve brought an assassin on our tail, we can just G.T.F.O. Honestly, I do not blame him.

We’re thrown out the front door, where the assassin has been waiting. *BANG!* and Knott is dead in an instant. I make a few lucky rolls, and escape, running through the forest and skirting a chasm, finding my way to a river, then a bridge, then a road, and finally someone’s vacation cabin in the woods. I sleep in the cellar, after barricading it soundly.

In the morning, I find a dirt bike kit here in the cellar. Fresh from the factory, just need some tools and a few hours. Evidently this cellar also has a machine shop and power, I guess, to inflate the tires and balance them, and the gasoline is still good after 8 years somehow. But hey, let’s not look a gift iron horse in the mouth.

For a few hours, it’s smooth riding. A small town named Gleeson has a drug store that wasn’t wholly picked over, and I make my way over a rock slide that covered the road, and finally arrive in Tombstone. I muse briefly about the OK Corral and other Old West musings, until I see the plume of dust behind me that is certainly the assassin. Who the hell is this guy? How does he keep on me?

I break into the courthouse and head upstairs, looking for a vantage point where maybe I can get a clean shot and assassinate the assassin. But it doesn’t work out. He’s quick and he’s careful, and he has some thermal imaging scanner. He notices me, and before I can do much of anything he’s out of sight again but this time he knows where I am. 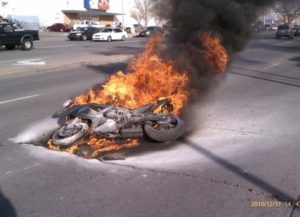 But first, he decides to do some maintenance on my motorcycle with an incendiary bullet. While I was riding my bike here, it had started to act up because I didn’t have any 10W40 and that’s really not healthy for engines. It was only a matter of time until the pistons were gonna seize.But *KABOOM!* I guess that’s not gonna be a problem anymore. This guy is a real pain, but I gotta admit, that was pretty cool.

I bolt to escape from the building, and by dumb luck… there he is.

And suddenly it’s over; I got my shot off first, and he’s dead.

I recognize him as Helmut Varken, one of HAVOC’s assassins from back in the day. Meaning, he was a high-value asset for Mad Dog Michigan, and also that I am damned lucky to be alive. The rush is so intense, that I need to take a drink because of the cold sweat.

I heroically loot his pockets. He has food, water, medkits, and bullets, and also some neat stuff like a tear gas grenade, and a map and a compass, and that cool imaging camera. I stay with the basics, though: a map and compass, after I patch up my wounds and refill my water and food. I then take his motorcycle, and hit the road.

I’m feeling a little cocksure at this point. I have a well-maintained bike with apparently an unlimited gas tank, a whole lot of bullets and medicine and food and water, and no more enemies behind me. I make it to the Interstate 10 junction again, and find sign that the convoy has been through, so again I’m back on track. And Kate is waiting for me.

Isn’t she just a treasure? The convoy got to Tucson, then she came back to wait for me along the route. So we pile into my roadster, and head to Tuscon.

But the assassin wasn’t the final boss fight here. Mad Dog Michigan appears in our rearview mirror, in some souped-up Death Race car. Bulletproof glass, a big ol’ lion on the hood, a machine gun mounted on the hood. Sick slab, yo! But he’s not here for a car show, and he tries to kill me. It’s a blur of accelerate-or-brake, roll to see if you dodge, roll driving, just non-stop d10-rolling craziness… and I push him off the road, into a ramp, where he careens into the river bed below.

That night in Tucson, we celebrate yet another city we can probably ruin by bringing down the wrath of angry bandit gangs, by singing “Ding Dong the Witch is Dead”. But I’m not at all certain.

There was no explosion, and there’s still the fourth and final book to go, and we can’t have a book without an arch nemesis!

To be continued… in the next book!