In book 1 we fled to Big Spring, but brought a gang of angry bandits with us, which ruined Big Spring so we had to flee again. In book 2 the Big Spring / Dallas joint colony made it to El Paso, which was backed by some remaining military forces… but again, we were tailed by an even larger, angrier, better-armed mob of biker bandits. So El Paso is ruined again. 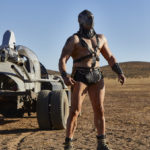 Honestly, I wouldn’t blame the citizens of El Paso, if they just handed us over to the bandits. “Give us the adventurer, and walk away. Just walk away.” But that would be a short book.

The book opens with a sabotage mission. We’re to cross the border into Mexico (Cal doesn’t even have a passport, and does have a history of violent behavior; you know that the Americans sneaking into Mexico, are not sending their best…) and destroy a cache of new explosive weaponry being delivered. The path is guarded by multiple gangs of thugs and bandits, snipers and bloodhounds — so about the same as current border patrol, but less well-groomed and with more found-object body armor, and no predator drones.

Our first task is simply to get out of El Paso and across the No Man’s Land watched over by snipers.  This proves easy enough: we are scented by bloodhounds and have to kill their handlers, but we got the drop on them and it was over in moments.

We meet back up at the bridge, and make our way across a maintenance platform. There are only two guards, and they’re dispatched in a silent-but-deadly cut scene. And that’s that… we’re inside Ciudad Juarez, staking out the stadium where the bandit gangs will receive that shipment. During our brief rest, I munch on some jerky and the last known Twinkie on Earth.

The convoy rolls in, and we got for it. I kill one guard, and lay my mine. We take off running, and I trip over something, losing 2 endurance as well as some ammo and medkits and other items. Nothing too important though. In another cut scene, we steal a truck and CRASH! through the gate. There’s a brilliant light and a KABOOM! as the bombs go off, destroying the stadium and certainly killing Mad Dog Michigan. (hmmm yeah, doubt it)

So our sabotage mission has gone great so far despite some of the crummiest dice rolls I’ve ever seen. On these “roll and add your stealth” tests, I’ve rolled exclusively 1s and 2s. So I’ve been spotted, tripped on the box, missed my shot at the biker bandits tailing us, …

Oh shit, there’s a gang of 5 bikes on our tail! I miss my shot, and one of them shoots me. I lose more medkits and endurance, before someone shoots back and the bikers back off. Meanwhile, El Paso is probably emptying out as our friends back home hit the road en masse. Everything is going to plan. We just need to shake these bikers, and make our rendezvous tomorrow.