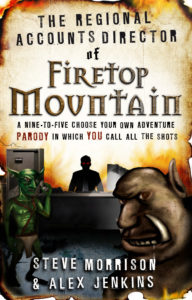 YOU become the temp, doing a data entry gig for Firetop Mountain, PLC for a few days. Or rather, you should be doing data entry but you’re busy screwing around like some doughty adventurer in those trashy Fighting Fantasy books.

It’s back-breaking labor, because of your chair’s faulty lumbar support.  But then you make a chilling discovery: that the blood powers a magical portal. The orcs, trolls, elves, and other magical creatures have been abducted into this world, and are working this minimum-wage office job against their will.

It’s up to you to find The One File that binds them all (and the One Binder which files them all?), to confront the Regional Accounts Director, and to set the office free.

RADoFM is a charming and amusing parody. A troll for a sysadmin. Skeletons with birthday cards. Inappropriate shapeshifting behavior in the office. A portal powered by the blood of temps.

As a game book, it’s not really playable with the rules as given. So, I adapted the Fighting Fantasy rules. Combat is multiple rounds, rolling Aptitude + 2d6, with the lower taking 2 Endurance. I also reversed the broken luck tests, and decided that starting stats are same as FF: 6+d6 or 2d6+12. And now the book is playable! Well, mostly; you would need to be phenomenally lucky, and there’s really only one path anyway.

The Office Luck rolls are backward, so that rolling under your high Luck is a failure. In the server room (200), with the proactive merfolk focus panel (212), when harassed by a shapeshifter (77), … On 243 it’s not even an Office Luck roll but a question about how lucky you have been recently, and being lucky means game over.

On 127 you’re asked a number, and are given “more than” and “fewer than” options, but nothing for “equals”.