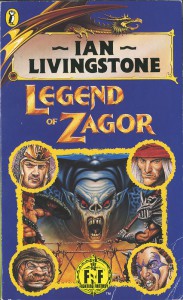 YOU become one of four heroes fighting the evil wizard Zagor yet again. The Warlock of Firetop Mountain is back for the third time, this time as a commercial promo for the Legend of Zagor board game. Choose from 4 adventurers and run them into the same meat grinder with no hope of survival!

The wizard starts off hopelessly crippled. Luck and Skill scores are reduced to reflect their varying degrees of weapon prowess (4+d6), while Test Your Skill and Test Your Luck rolls are the standard 2d6. And there are lots of these rolls, which will deplete your Luck early into level 1 of the castle. Combined with your Skill of 5-7, you won’t last long.

Sadly, the wizard was not accommodated with reasonable magic. Sallazar gets 7 Magic points. It costs 4 to use a teleportation gateway, 1 to open a door, and 3 or 5 to use a combat spell which will miss anyway since you need to score a regular combat hit against your enemy who likely does not have a Skill of 5. Being able to do 5 Stamina damage one time in your whole adventure, really doesn’t cut it.

The warriors fare somewhat better, but are still hopelessly outmatched by the sheer volume of monsters and traps. Even the precious Tower Chests are trapped and are as likely to kill you as the boss monster that was guarding it. Some of absolutely-required combats include a wyvern (10/16), an ogre boss (9/22), a dragon (10/16), another dragon (15/22), and of course Zagor (16/20). And if you aren’t cheating by using your knowledge from previous playthroughs, there’s even more.

And when you beat Zagor you don’t win anyway. Now you need to Test Your Luck and Test Your Skill several more times, and hope that the numbers don’t add up to your time running out and Zagor coming back from the dead anyway.

Significant portions of the book only happen if a dice roll is made, again by a Skill roll, e.g. whether treasure is found, whether a secret door is noted. This isn’t unusual for FF, but in this book it’s overly prevalent and means missing out on big stuff you know is there. With a four-player board game that would be different, but for a FF book that’s already a grueling adventure it was just too much.

I don’t normally gripe about the books being hard. But this one was just unplayable with any fairness.

The whole book, really. But, no, seriously…

If you use the onyx staff on the Hellhorn Champion, the book says to return to page 223 and resume combat. The correct page number is 233. 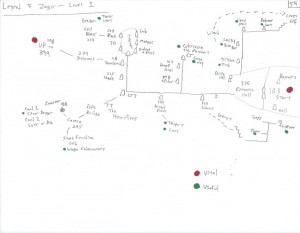 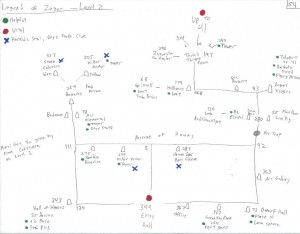 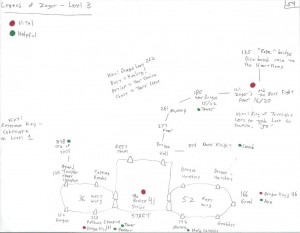 Book 54 in the series