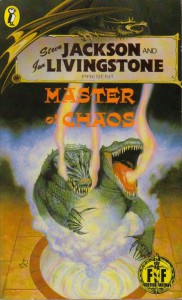 YOU become a slave on a pirate ship. A wizard has acquired an overpowered magic staff, the other wizards are jealous. They send you to the ruins of Kabesh where the wizard is hiding, so you can kill him or steal the staff.

But their plan for getting you overseas, involves stripping you of weapons and provisions, and getting you shanghaied as an oar slave!

Along that same brutal theme: in this book, you don’t eat Provisions to heal… you eat them so you don’t die! And the Provisions go bad in the hot desert. Yeah, this book puts Deathtrap Dungeon to shame.

Once you arrive at the port town of Ashkyos, the book really opens up. It’s comparatively “open world” for a paper-based virtual world. You can wander around the city of Ashkyos finding some honest work, and some less-than-honest work, until you’ve collected supplies and it’s time to find passage across the desert to the ruins of Kabesh. And multiple options exist for how to get there; like real options with different storylines.

Once you get to the ruins of Kabesh, again with the open world idea. Explore at your own pace and in your own sequence, until you find what you’re looking for. Way cool.

This is one of my favorite of the series so far.

The only letdown is that Notoriety is only used for one context: getting kicked out of Ashkyos. And that just doesn’t happen anyway. The book could have been a lot better if, while in Ashkyos and you revisit a place, the “Guards catch you, The end” scenarios were replaced with “Gain 2 Notoriety” which may make you flee town ill-prepared. It would have been better still, if Notoriety had any function later on such as your dealings with other people. But no, it was something of a throwaway mechanic.

Who in the world is Naas? If you didn’t rescue him back in the city, you’ll wonder why “this time” he can’t let you go. It’s a minor typographical thing, though, not a game-changer. 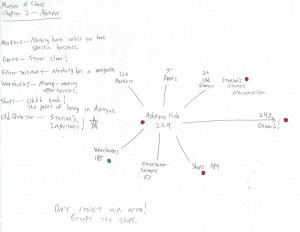 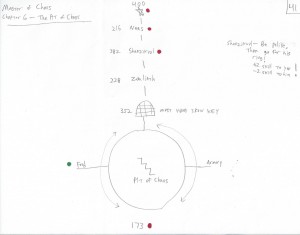 Book 41 in the series