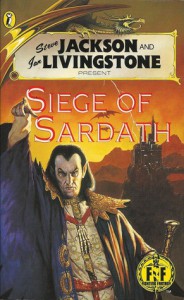 YOU become the hero of the Forest of Night, your homeland. The trail maintenance has gone to hell so trading caravans aren’t coming, and animal control has been slacking off so the trails are dangerous. Rather than hire more park rangers, the council wants to send an army into the woods.

During this argument over how best to handle the challenges of land stewardship, a shapeshifter tries to kill you, right in the council chambers. Now turn over…

This one is hard, but masterful. It took me some time to really catch on to some missing elements, but once I did… I had to admire what Keith had done.

A new mechanic here: The date. At certain points you sleep for the night, move to the next day on the calendar. If you get to Sardath or to the mountains too late, tough luck; the army of flying dark elves has amassed and game over. So not only do you need to find a path, you need a quick path.

The potion maker was just brilliant. You find various reagents (blood, pixie dust, powdered unicorn horn) and mix them to make something happen (2 + 5 + 3 = turn to 253). You can’t really cheat on this one: if you don’t have the reagents you won’t know the numbers. And there are some surprising things that happen here!

The red herrings. Oh my goodness was this brilliant. Like many FF books, you get to a certain point and find that you don’t have the right key, game over (Warlock, Citadel). Some have you instantly fail if you didn’t grab the right item on the prior page (Rogue, Freeway). This one balances those two extremes to a degree I’ve not seen yet, which make the game totally baffling at times.

The dark city, too, just masterful. The elves would recognize a human on sight, of course, and the architecture is as cyclopean and eldritch as R’lyeh, and the way it’s worked into the game mechanics is brilliant. A bit Luck-heavy but quite nicely done.

And the map itself, by the time you’ve sketched it all out, is quite large and quite complex. Not one of those cases where you find that you just traveled a choice of two rectangles; quite the opposite. 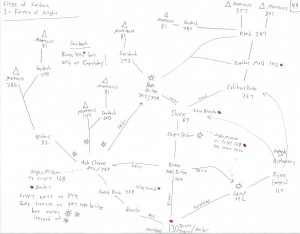 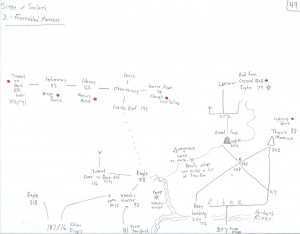 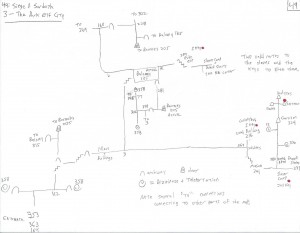 Book 49 in the series