The Keep of the Lich Lord 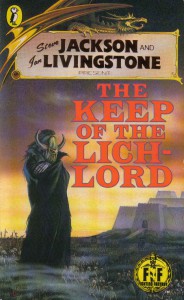 YOU become the hero of Stayng Island, when a necromancer named Mortis (of course) comes back from the dead, not only building an army of undead from the corpses of his victims, but also making deals with the local pirates to raise hell and pillage in addition to taking slaves to be turned into zombies. So in usual Fighting Fantasy fashion, your mission is to go to the wizard’s castle and re-kill him.

I enjoyed the story layout here. There’s one beeline to the Keep and Mortis, and everything else is an optional side-quest for buffs. Unlike some others (Island of the Undead, Warlock of Firetop Mountain) there is no scavenger hunt to find the right combination of keys/gems from every single page of the book. If you have good stats, you just kick in the door and beat that sorcerer down. If your stats aren’t so hot, do some of the side quests to improve your sword, get a spear that does double damage vs undead, or buff up your bravery. By being very simple at its core but expanding well beyond that core, it allowed for a lot of replayability; not to find that missing key so I can maybe win this time, but just for the fun of finding out what I missed.

There were two mechanics added for this game: Resolve which is your ability not to be terrified of undead, and Alarm which indicates how many wandering monsters will attack you inside the Keep.

Alarm felt like a throw-away. It starts at 0, can only go up by 1 or 2 at a time, and is tested against 2d6. In your worst case it attracts several more fights, but over several plays my Alarm never got above 3.

Resolve was a good one, though. At various points you’ll run away from treasure, or fight at a penalty, if the monsters scared you. It added some atmosphere to the whole thing, though it wasn’t quite as omnipresent as Fear was in House of Hell.

In paragraph 94, it says that you can go west toward Borgos. Of course, Borgos is east and northeast. 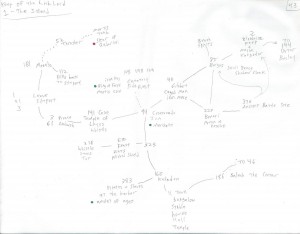 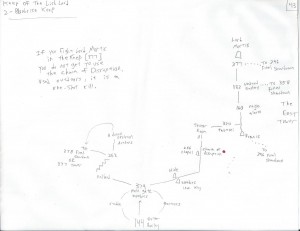 Book 43 in the series