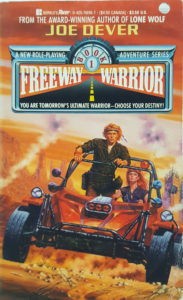 YOU become Cal phoenix, a scout for Dallas Colony 1 on a road trip from Dallas, Texas to Big Spring, Texas.

Normally this trip of under 300 miles, would be a fun road trip: pack some Mountain Dew and a handful of mix tapes (it was 1988) and we’ll be there in 6 hours even if we have to stop a few times. But it’s an alternative world, and it’s not that easy.

In 2008, a nuclear attack wrecked most of the world. Twelve years later, in the futuristic year 2020, the community of survivors has gotten in touch with another community in Big Spring, and that community sounds like they have their stuff together: walls, food, medicine, a larger population. So, in a move completely atypical of Texan survivalists, y’all decide to move to the big city and join up with them.

But, your first order of business is to antagonize a new biker gang that’s moving into the area. The roads are a wreck and the way is already lined with survivalists and gangs, and western Texas is still a desolate and inhospitable desert where a day without water can kill. But now you’ll have this angry mob on your tail. Just trying to keep things interesting and motivated.

Can you make it 300 miles through the remains of civilization, in a blasted desert wasteland, to a city that’s slightly less awful? You’d better, because this is only the first in a four-book series. Freeway Warrior!

The story line has great potential. The Road Warrior was a fun movie, and it’s a change from the usual swords-and-magic stuff. And it’s Joe Dever, so I expect that a four-book series is gonna turn out great.

But this book, well, could have been better in a lot of ways.

The backpack system did not adapt well from Lone Wolf. Why would I need to fit all my belongings into my backpack, including bins of salt and spare car parts, when I have a car? There really should be a second inventory section for my car’s boot (trunk). The food & water mechanic is also a bit daft: we’re a traveling convoy of a community of 25 people, so why am I stuck with two MREs and a canteen that I can’t refill?

Second, the map is a straight line, with a few two-page turnoffs to pick up loot or fight a slightly different thug. There’s only one spot that diverges for a few pages, and in both cases it’s the same storyline of being captured, hiding out and drinking your water, and getting some great loot. So, the map and layout was not inspiring, and fell short of the truly large and complex scope of Lone Wolf 1 Flight From The Dark.

The writing is decent, I’ll give it that. The descriptions of landscapes and vistas really lay on the dry, dusty atmosphere of the Texas desert. Even though it’s fairly repetitive ruined roads, ghost towns, and bridges that are out or else barricaded… well, that’s Texas, and I don’t imagine that The Big Boom improved it any. 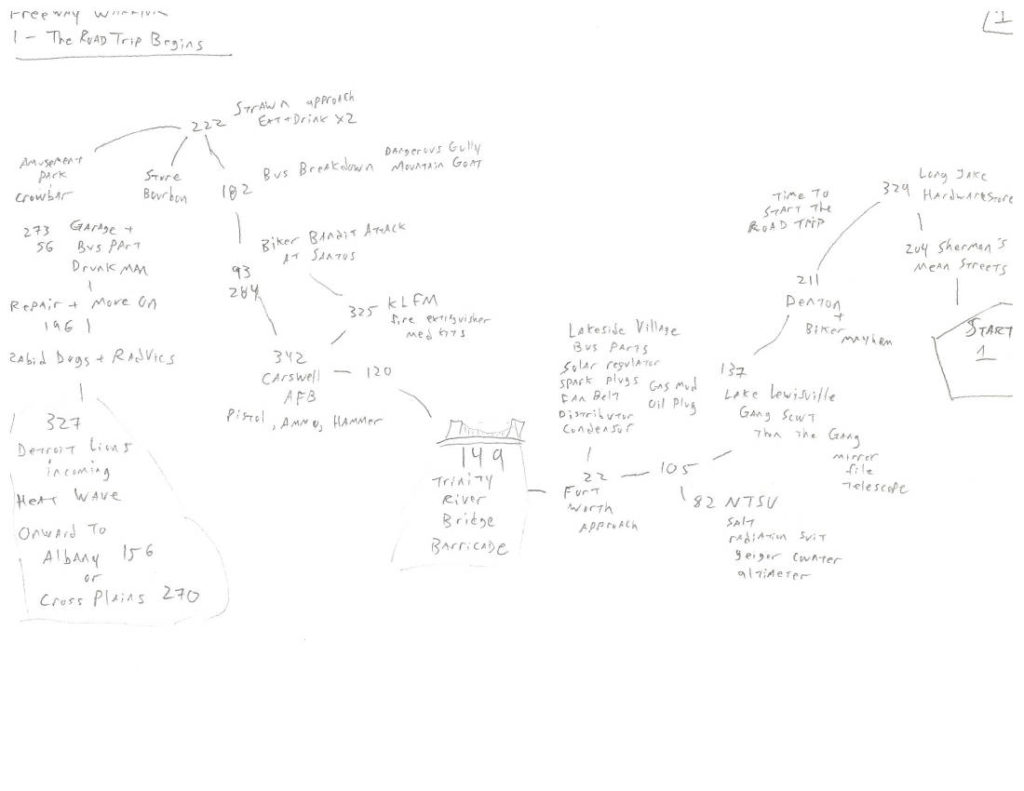 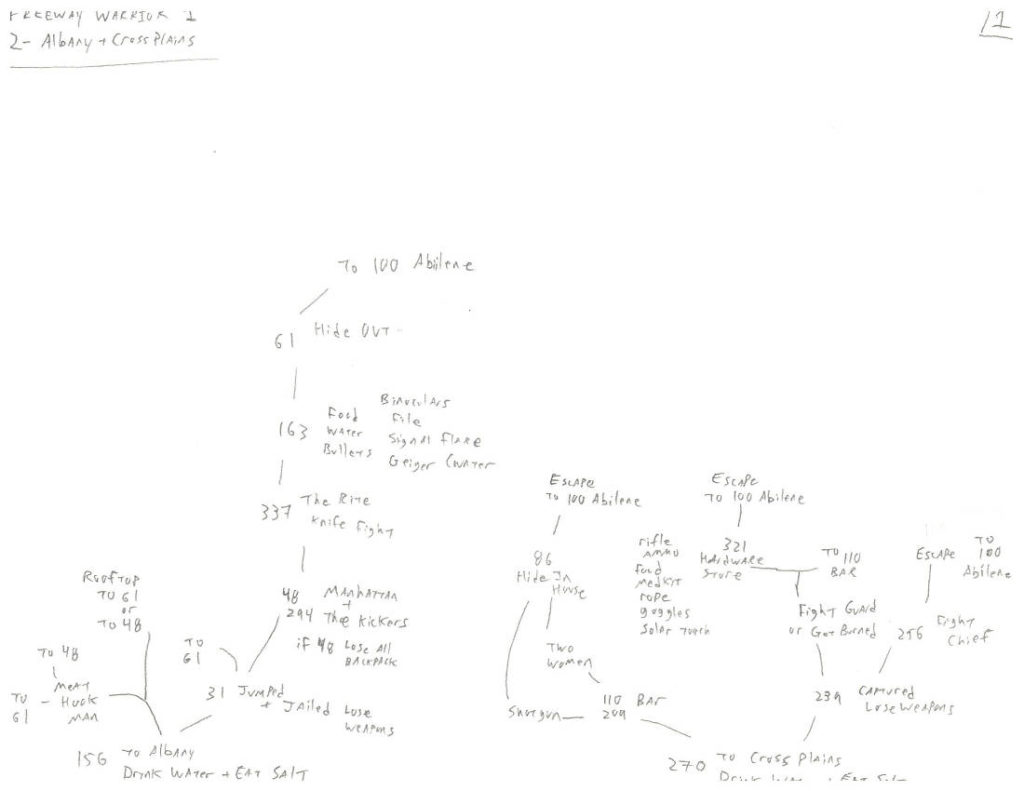 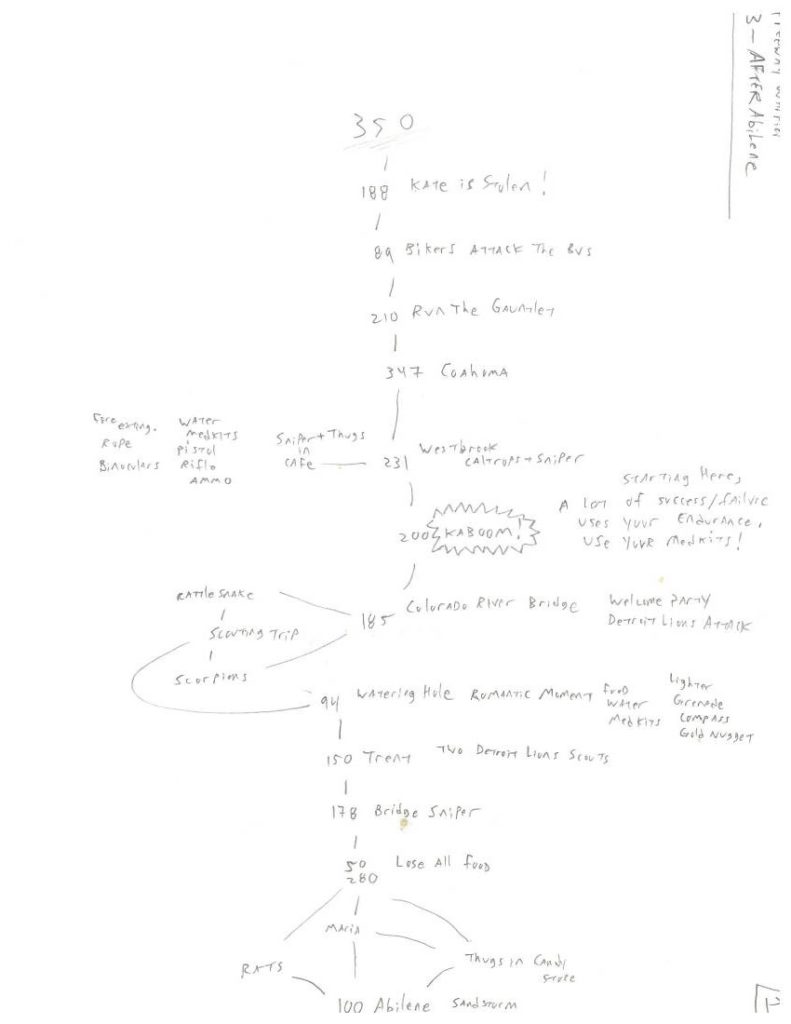