Flight From The Dark 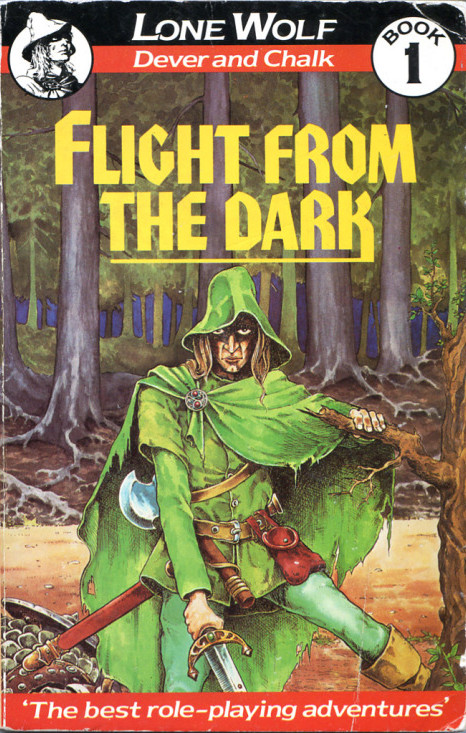 YOU become an elite warrior, and a refugee when the Kai monastery is destroyed.

It’s the same general legend you’ve heard before a la Mordor. A zillion years ago, a whole nation of evil monsters, victory for the good guys thanks to a magic sword, then nobody checking on the monster kingdom for a thousand years as they build a giant army of nasty monsters, … and now they’re back.

Among the first casualties in the path of devastation is the Kai monastery where you live. The Kai are elite fighter-woodsmen: ranger, ninja, adventurer sort of deal. The Kai monastery’s location near the evil monster hordes was so they could protect the rest of Sommerlund. It didn’t work out.

Now you’re on the run, to get to the king and warn them of the invasion and offer what help you can. You’re the worst of the Kai, but now you’re the only Kai… Lone Wolf.

I was quite surprised to win on the first playthrough, no cheating or anything… though I did have the great fortune of a 19 combat skill (the max). I did so by taking the coward’s route: hide in the forest, take the rough path, don’t talk to anyone, run from everything.

I played a few more times as well, and really appreciated the writing. The overall theme of it is dark and awful: burning villages, fleeing refugees, a flight while running scared. And that kept it interesting through several playthroughs.

The writing does have a lot of “do nothing” options, though, and a lot of rough spots. Head east: it’s a dead end so you back up and head south — then why was east even offered? When some refugee children are being attacked, the page with the fight doesn’t even mention the children again, but does mention returning to a farmhouse that wasn’t there a moment ago. A few “never mind, do the other one” pages are to be expected, but there are rather a lot.

Overall I think that the difficulty is very well calibrated to introduce you to the Lone Wolf gaming system, and give you an easy way to win, … a prep for the second book where the difficulty increases.

I did think though, that the Sixth Sense and Tracking superpowers are a bit overused to warn you of danger and force you onto the safe path, making those skills somewhat overpowered. The Healing skill is even more overpowered, though, healing 1 point of endurance for every page turn not involving combat, so that you’re at full endurance almost all the time.

On 222 you use your Sixth Sense to decide whether to go south or east. You sense that east is safer… but the page number is to the south where you meet a bear. Oops.

In the clearing at 125, you come in from the west. You’re told that on the far side is an exit to the west and to the south. The west one is a dead end… despite having come from there a moment ago. 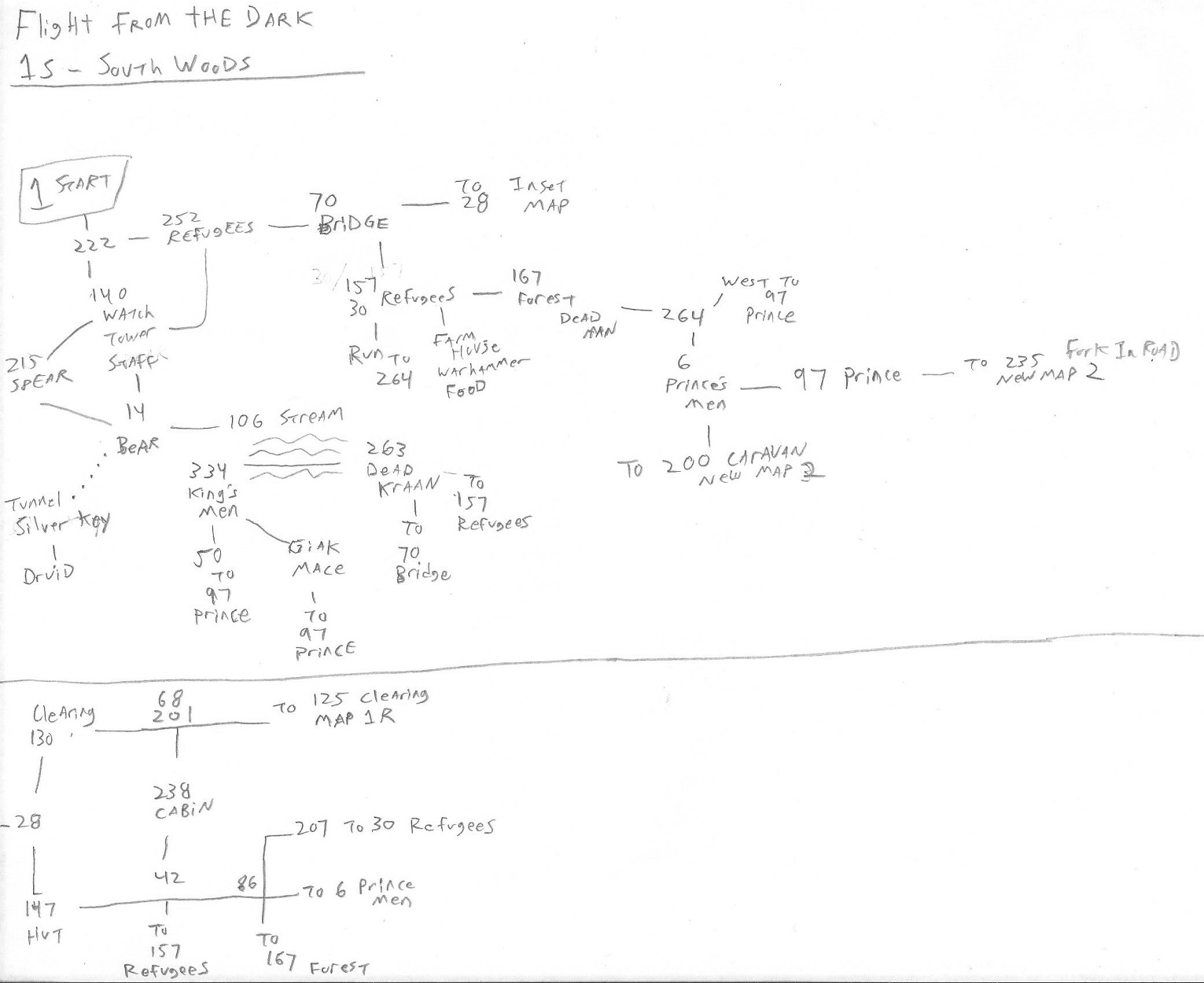 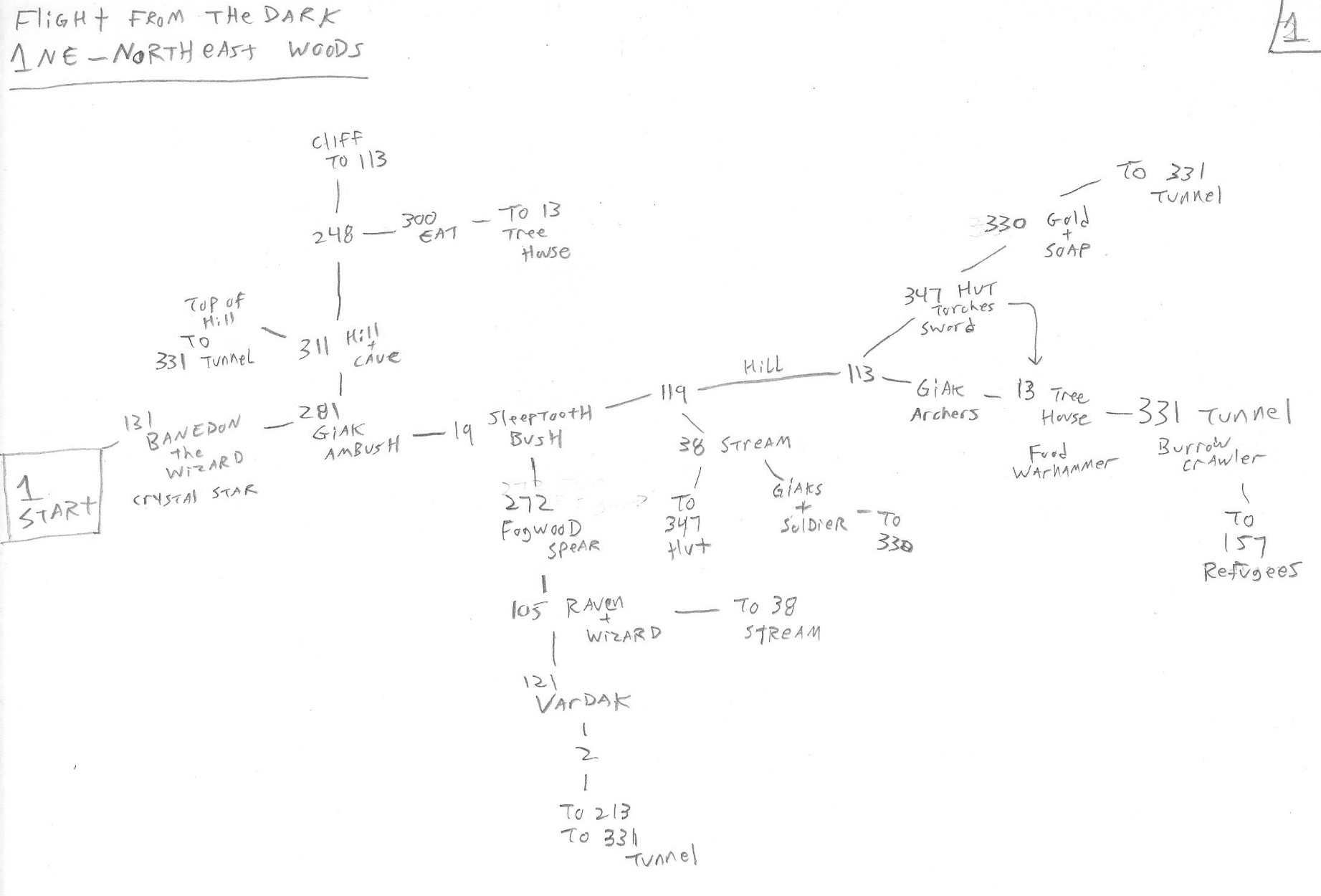 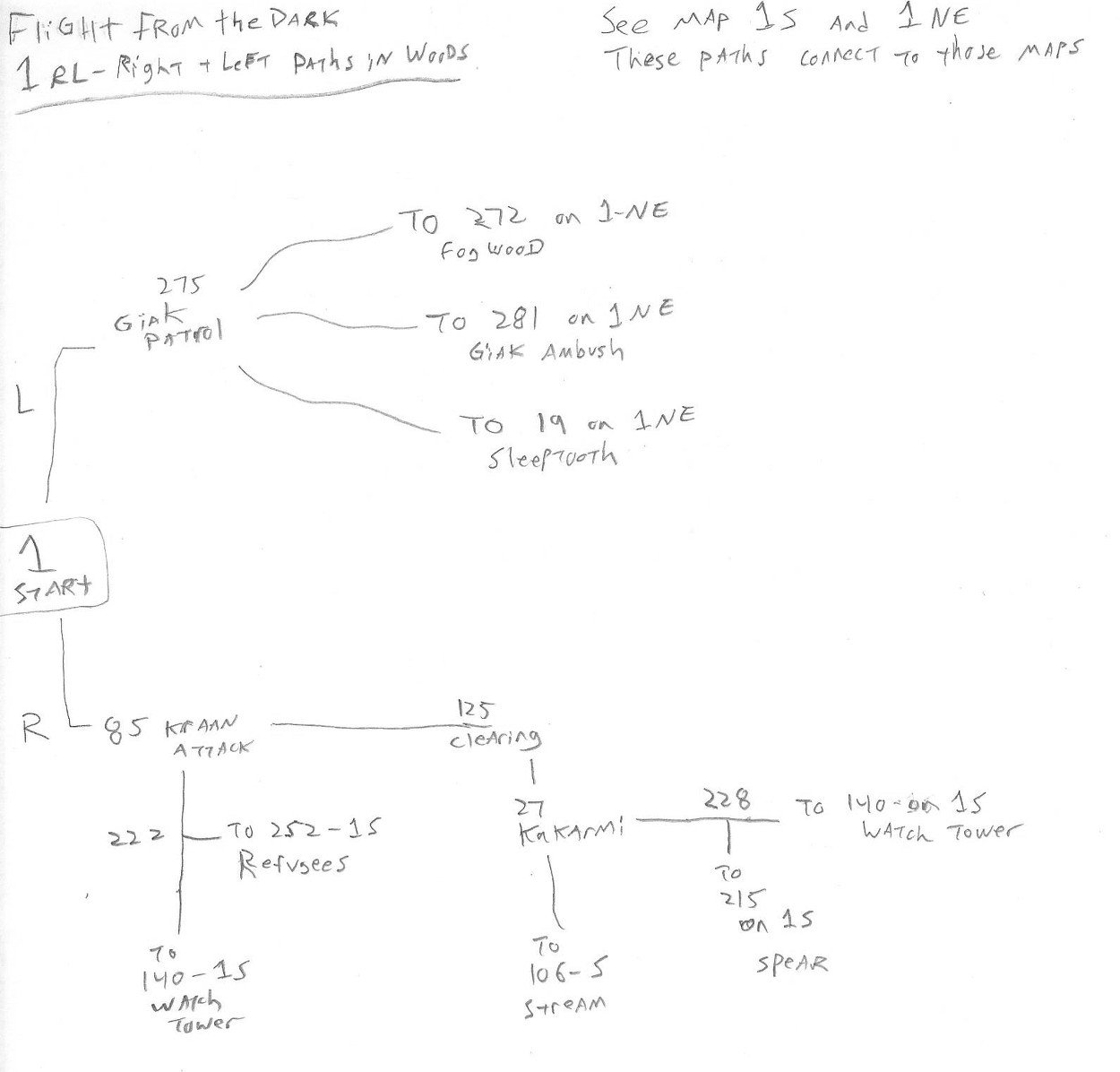 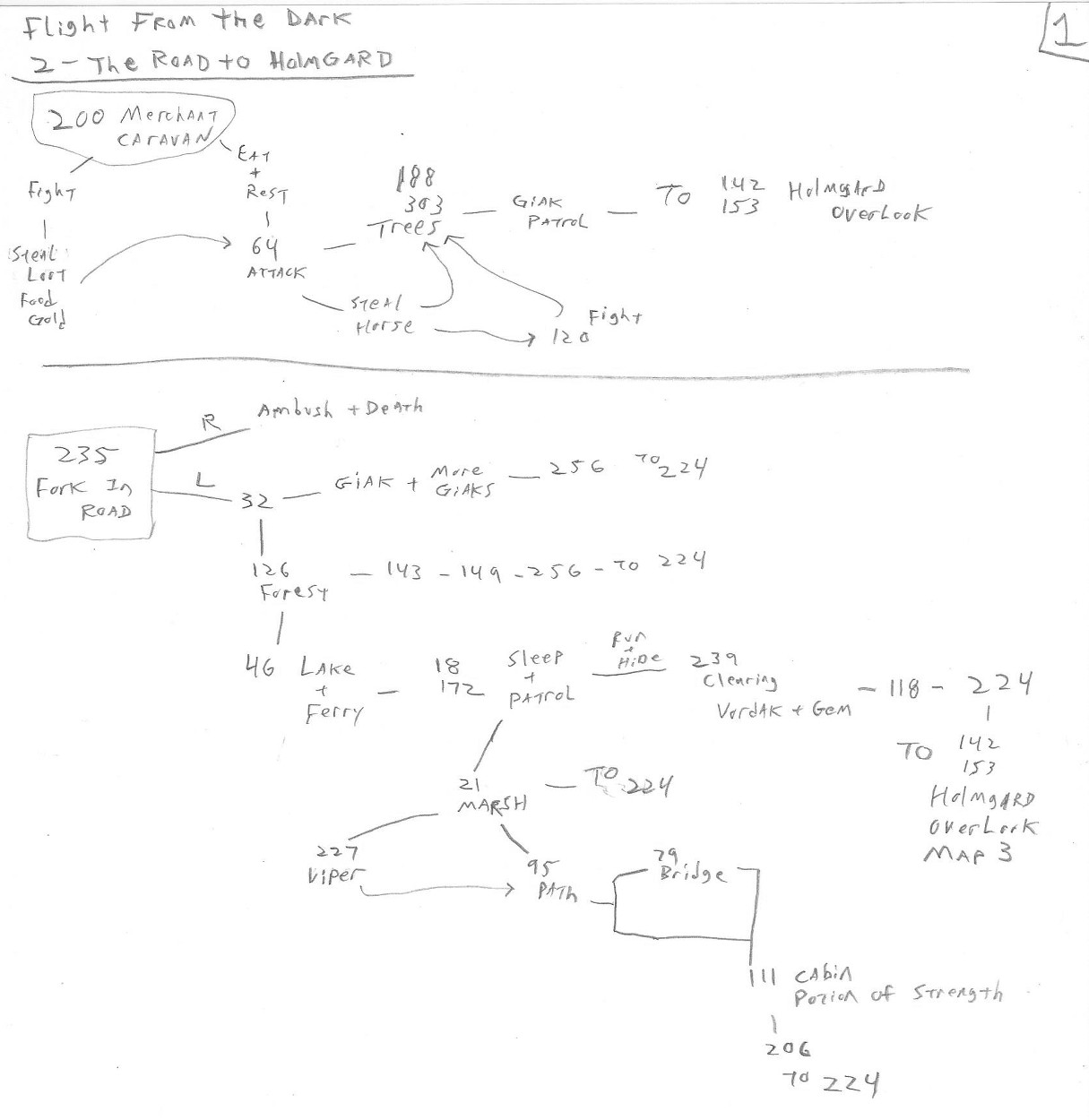 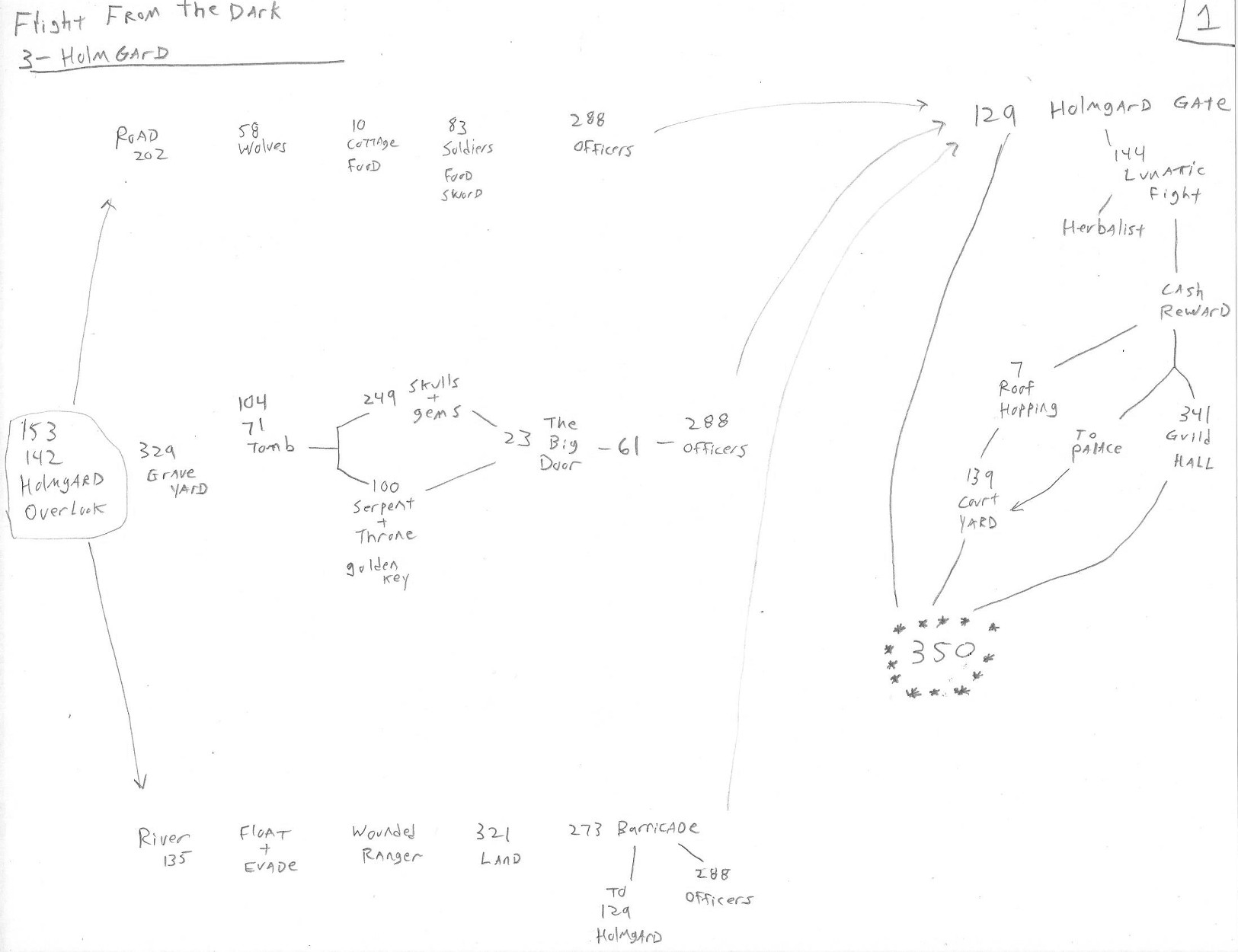