The Plague Lords of Ruel 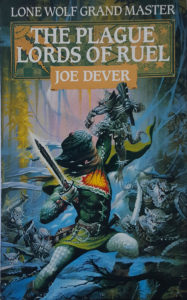 YOU are still the hero even after a few years off to become a teacher.

After book 12, some 10 years ago, the Darklords and their servants are scattered and fighting among themselves, and are no match for the combined armies of Magnamund. It’s not peace, but it’s not a hopeless war.

You (Lone Wolf) re-established a new order of Kai and have been training whole new generations of them. So now there will be more defenders of the realm the next time some baddie wants to threaten it all.

A sect of religious extremists is brewing up a plague that they intend to unleash upon the world. As always, an army was sent in but was destroyed by the wildlife in the forest, and all the other Kai are busy with homework or something. So, cancel L.W.’s retirement party, put on the green cloak, and blow the dust off the Sommerswerd, because Lone Wolf is again the only one who can save the world.

Honestly, I’m pretty disappointed. The story is an unoriginal trope: assassinate the bad guy, the whole army failed so we’ll send You The Hero. Yeah, a lot of game books do that: that’s why it’s called “unoriginal” and “a trope.”

As with the Magnakai series, the game balance is totally borked. Despite claims that a newly-generated character could win, the enemies and encounters are calibrated to veterans with the +8 Sommerswerd and its magic-absorbing capability. The skills of Huntmastery and Psi-Screen are overused, to a point of being required even for a veteran character.

The world inside the book is small and mostly linear, and lacks that immersive feel of an epic quest to make up for it. The writing tries ad nauseum to play up that you have superpowers of night vision and healing and invisibility, but honestly it feels strained and repetitive.

I hope book 14 is better, because there are 8 in this Grand Master series.

In the rules, Grand Weaponmastery is said to be +5 in one place and +4 in another. Reading around a bit, I’m going with +5.

The rules also are unclear whether Advanced Curing / Deliverance includes Curing’s usual +1 healing per page. I had to look around a bit and found a LW newsletter from back then, stating that kind of like your Special Items it is included if you brought it from a previous book.

On 188, you’re asked if you have the skill of Grand Mastery. That’s silly, as there’s no such skill, and if you’re in book 13 then Lone Wolf is by definition a Grand Master. What was intended here…? 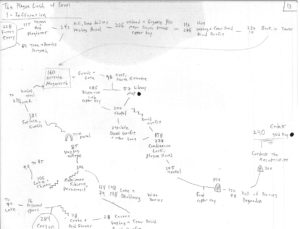 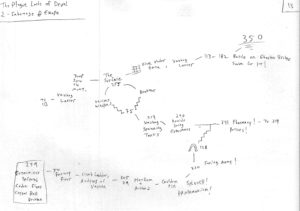