The Prisoners of Time 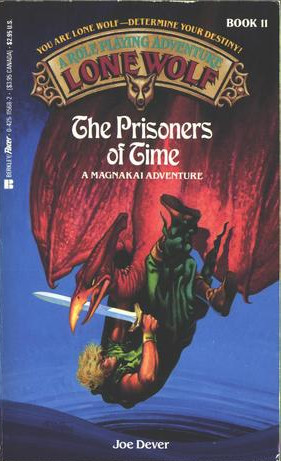 YOU become a prisoner in the Magnamund version of the Phantom Zone.

At the end of book 10, the last three Lorestones were suspended over a pit of infinite blackness, and as Lone Wolf reached for them, Darklord Gnaag sprang his trap. The pit was a Shadow Gate and after falling for hours or maybe days, LW lands with a thud, and finds himself in the barren wasteland that is the Daziarn Plane, a separate plane of existence.

Cut off from our own world, LW is still on his quest for the last two Lorestones… and also the Shadow Gate back to Magnamund.

The illustrations in PoT are just incredible. I don’t normally pay much attention to them, but this stuff is just great. The Yoacor and the Beholder, the pack of Agtah at the bridge, the Chaos-master, … just incredible. Brian Williams, good stuff.

The story itself, pretty good as well, if a bit heavy on exposition. The maps will show that there are only a few deviations from a straight line, and there are lengthy spans without decisions where you’re being passed from one caretaker to another. It’s a big difference from most of the prior LW books which have complexity and multiple paths.

The atmosphere is great, though. The world is dissolving into Nothingness and is overrun by abominations, and a mystical, other-worldy feel pervades the allies you meet along the way. A walk through the Nothing, subjected to psychic attacks, and meeting Kai itself… really makes this otherwise short and prosaic adventure, feel as other-worldly as it should.

This book also attempts to balance the game for long-time players (a +8 Sommerswerd and +10 in other equipment and skills) with new players (your starting 10 + 1d10 and maybe that Ironheart Broadsword if you found it), but honestly it kind of fails on both. For a new player with only 1-2 skills and no shield nor helmet, there’s little hope of beating the Chaos-master and no hope at all of beating the 2 boss fights at the end. If you’re a long-time Lone Wolf, it’s also near-impossible because the Chaos-master is badly overpowered and the 2 boss fights merely farfetched.

I know that book 12 is the end of Lone Wolf’s Magnakai adventures, and this is the setup for returning to Magnamund for the big boss fight to end the original storyline. I’m looking forward to it, after some laumspur and a Meal.

The Chaos-master fight, I don’t believe can be won. It has a CS of 47, while the highest possible for a Scion-Kai with various combat buffs from the first 10 books plus the right 3 circles would be 45 even with an alether potion. It has 56 endurance, half again Lone Wolf’s max of 35. I ran a program to roll dice for a -7 balance, and out of 200 plays, Lone Wolf did win two times. So… yeah. 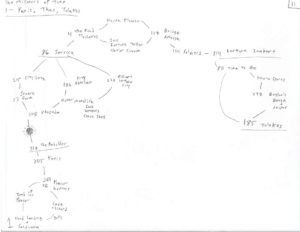 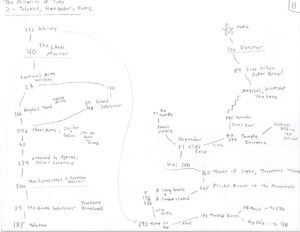 Book 11 in the series