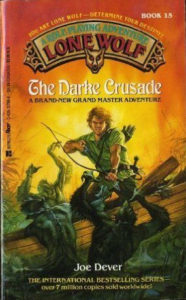 YOU continue to be the hero of Magnamund, to stop a Drakkar wizard from getting his hands on the evil version of the Lorestones.

The nation of Lencia is still at war with the Drakkarim, and they have some bad news. The bad guys also have a lost, legendary stone that will give them superpowers. If Magnaarn gets his hands on it, not only will he have superpowers, but then he’ll have the gravitas to unite the various armies of baddies. The resulting army would be unstoppable, overrun the world, … yeah you know the rest.

I’ve been griping for a few Lone Wolf books now, that the series seems to have petered out. So I’m calling it quits with this one, which I had about 95% mapped out and then just got bored and quit.

The overall plot arc is tired. The same war has been going on for 24 years, and you’ll encounter the same bad guys as in the last 14 books. Honestly, it’s kind of tired. Sneak into a city of Drakkarim, note that the city is ugly, evade patrols of giaks and Drakkar Death Knights, kill their boss. I’ll grant that the “wizard hunt” plot is a staple of gamebooks, but at one time Lone Wolf was better than that, or at least the writing made it feel like more than that.

The internal maps are straight lines and your choices don’t matter at all. Seriously, there are so many of these that it’s absurd. Search the east side of town or the west? Doesn’t matter, copy-paste the same text then turn to finding the soldier in the basement. Do you have Pathmanship? No, then you hear an animal and turn right anyway, same as if you had Pathmanship and heard the animal. Do you have the key? No, well then you pick the lock with your Kai skills anyway. The only part of the book with any variation and branching at all, is the temple at Antah. And that part is a pretty decent dungeon crawl, where your skills or puzzle-solving make a difference. Honestly, on my second playthrough I was pleased to have the wrong skills and find that there was another dungeon that I missed the first time.

Gold is useless, and there’s no advancement. By the 10th book in the series, I’m not sure why we even have a money pouch anymore because there are no merchants. There are no opportunities to buy laumspur or alether, and only rarely for food. You start with a standard weapon, and there’s no such thing as a really nice sword that’s +1, nor armor that’s +2, and so on. The only sort of advancement or improvements are by finishing the book so you have another superpower for the next book. It’s been that way for a while, and it’s bugged me.

Even the proofreading is tired. Houses have been “raised” to the ground, and someone recognizes Lone Wolf as “Somleading” instead of Sommlending. I can forgive a typo, because I know they bother me more than they should, but combined with everything else, it made the lazy writing feel even worse, like even they can’t stand re-reading their own writing.

But, I don’t want to end with Lone Wolf entirely on a negative note.