Escape From the Billings Mall YOU become a dad rushing to the mall right before it closes, to buy a birthday present for your son.

But picking the right present before the stores close will be the least of your worries tonight, because a timeline tear has created a rift all the way the The Void. The mall is besieged by Void crabs, the unicorn security guard is growing tentacles and speaking with the voice of a thousand collapsing stars, and you need to escape… from the Billings mall.

Ah, Chuck Tingle – tae kwon do grand master, DeVry graduate, and of course… the world’s greatest author. His gonzo gay erotica has gained him a cult following, and a platform for him to remind people that Love Is Real. So when the first Select Your Own Timeline came out, I was genuinely shocked that it was without pounding. If you don’t know what that means, look him up.

Escape From the Billings Mall is a fun ride. The writing isn’t very complicated, and the game system is merely keeping track of items in your inventory. That makes them very easy for folks new to the concept of interactive fiction. And there’s no pounding, so it’s also safe for all audiences.

The “timelines” of your playthroughs have a lot of overlap, the same store and same people but with slightly different wording here and there. It’s not lazy writing; it’s intentional and metaphorical, because most of our day to day choices have only small consequences on our timeline and we never know about them until we look back.

You’ll meet unicorns and dressers and bigfoots and Void crabs and other critters not found on our version of Earth. You’ll meet wizards and listen to pop music and eat spaghetti as fast food. You’ll get to know the goofiness that is the Tingleverse.

If you’re lucky you’ll escape with your life. If you’re very fortunate, you’ll even have a birthday present. But you know what? Spoiler alert Your son won’t mind if you don’t have a present because your being there is the greatest present of all, and all 10 versions of the birthday party are love between father and son.

Escape From the Billings Mall was (as far as I know) his first try at something other than gonzo gay erotica, and his first try at a branching narrative. It’s not a masterpiece, but it’s a good time – good enough that I buy every one when they come out (6 as of summer 2022).

Of course the book has plenty of typos and auto-correct failures, which typify all of Chuck Tingle’s writing. Believe it or not, it’s intentional and a meditative part of his process… 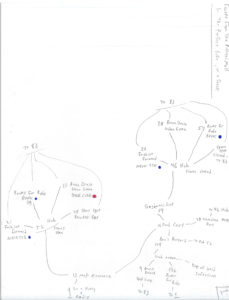 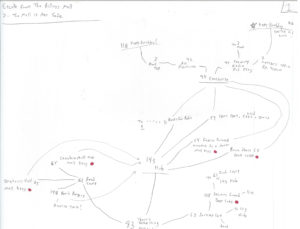 Book 1 in the Select Your Own Timeline series