YOU become the trucker on your last run before retirement. It’s a milk run, literally – a truckload of delicious, creamy chocolate milk headed to San Diego. But when you’re run off the road by a devil and a bigfoot looking for a mysterious device, and they don’t even care about the precious cargo… things apparently are not what they seem.

Now you’re on the run to San Diego with a device that can bring more love to the world, or destroy the whole universe. And guess which one the devil wants to do?

But you’re not alone. Along the way you’ll make new friends and you’ll meet old friends from the Tingleverse. Keep on truckin’ and keep on provin’ love is real.

This third entry to the Select Your Own Timeline series by Chuck Tingle (world’s greatest author, and eternal prover that love is real) is a fun time, though technically it’s not a high point in the series.

First, the adventure is quite short spanning only four or five scenes: the gas station, the ambush, escape, Las Vegas, San Diego. You can burn through it in about 15 minutes if you make the right 10 choices.

Second, the complexity of the book is very low and the repetitiveness is very high. There are only 4 major branches making up the bulk of the story, 3 of them being the gas station and ambush, and making only tiny differences with the exact same outcomes.We played through several times before we realized “wasn’t there a triceratops last time?” and several more before we ran into jackalopes. Again, it’s not lazy writing but metaphorical: day to day decisions affect our timeline in small ways that we only notice if we look at other possible outcomes. Still, given that it’s only four scenes the repetition really stood out.

So as far as a game book, I was somewhat disappointed.

But as a romp through the non-sexual side of the Tingleverse, it was fun. You’re trucking chocolate milk which is valuable here. The mechanic is a triceratops and the storekeeper is a potato, and you’re guarding a magic button. You’ll meet old friends like Kevin the living billionaire jet plane and Orion the space raptor, and maybe catch a glimpse of Torbo the sommelier. You’ll make new friends like the Davis family.

And sometimes it’s not you who saves the day; most times it’s your buds who make the delivery possible – and your buds stepping up, proves that love is real.

On 138 you’re gunned down by a unicorn, but the guard was a triceratops. 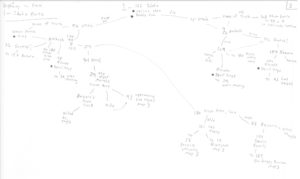 Book 3 in the Select Your Own Timeline series