Demons of the Deep 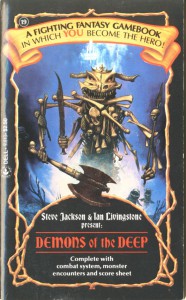 YOU become fish food, when your ship is attacked by pirates! Your crewmates are killed outright, but captain Smellybeard has a special treat for you… walking the plank. With a sword and a sack of food.

You sink down to the city of R’lyeh, grow gills like in Dagon, and put into motion your plan to amass an army of the living dead… to wreak a bloody and humiliating revenge on captain Smellybeard.

This one was a lot of fun! One of my favorite properties of the book, is multiple outcomes. There are several outcomes where you get home safely, or destroy the ship and get your revenge, in addition to the big finish where you ride in with a legion of skeletons. Even the big ending, can be had with varying degrees of difficulty: if you don’t get enough Black Pearls you’ll have a harder fight on your hands, but you can win.

The map isn’t completely one-way, and isn’t at all straightforward. You’re channeled into moving forward, but with a surprising number of diversions and backtracking allowed. I enjoyed that, and it made the mapping more complex.

The game mechanics are pretty straight and plain: no spells nor magic items, 10 Provisions. Still, the writing was enjoyable and the not-always-linear play and multi-win thing really made this one a winner. 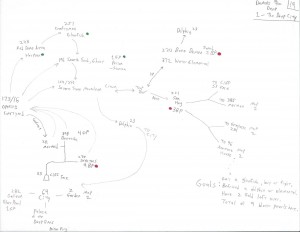 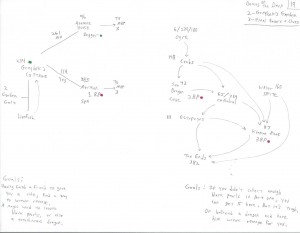 Book 19 in the series