Island of the Undead 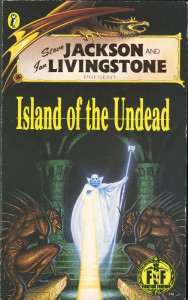 YOU become the hero of the fishing island you call home. The wizards who keep the weather pleasant and the seas calm, have been slacking off, and it’s your job to find out why.

Turns out that three of them are dead, and the fourth one crazy with power, after some tinkering with magic and undead and stuff. Hold your breath and get diving, cuz you’re on a wizard hunt without a sword!

This one was fun, if a bit tedious. You need almost every single item in the book, and for the most part you need to acquire them in a specific sequence. Combat was a bit overdone as well; if you have a Skill under 11, consider it an information-gathering run, cuz you’re gonna die quickly.

Worst, some of the information and items which you need to complete the adventure, depend completely on a lucky roll.

The addition of Presence as a new attribute, had a potential that I felt wasn’t realized. You gain Presence by doing deeds and winning fights, and having a high Presence helps you to gain friends and influence people. In some places you can sacrifice Presence to strengthen a spirit, so you can get information from them. I liked these aspects of it.

Still, Presence didn’t always make sense: why would a high Presence cause you to know that someone’s hiding behind the door, or cause your footsteps to make more noise? And worst, in at least one case the randomness of a Presence test makes-or-breaks your ability to know a wizard’s name and thus get past the next room.

I did like that we had to eat our Provisions as we explore, beyond simply using them as minor healing potions, and that there was plenty of food on the island to replenish it.

And I did like the outdoor map, and the almost-freedom of movement. I really dig when books have that feature.

So all in all, Island of the Undead isn’t destined to be a favorite, and was merely “okay, I guess”. Starting on the character sheet before even page 1, we see bugs and typographcial issues that cause me to wonder whether they were really paying attention when they wrote it.  Still, it was better than Legend of Zagor!

The book has several bugs in it, some of them critical. I do wonder whether it got really quality-tested… 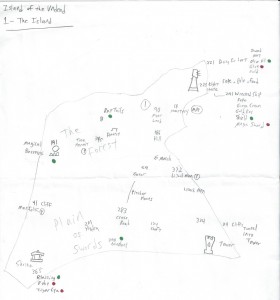 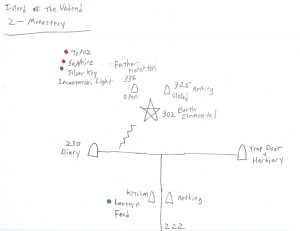 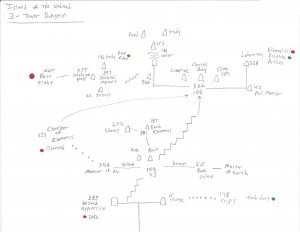 Book 51 in the series