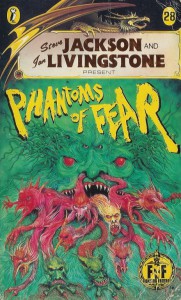 YOU become the lucid-dreaming shaman-protector of your village when the forest sends you dreams of an evil presence spreading through your forest home.

Treading boldly into the forest without even packing a lunch first, you do find the source of the evil: a demon prince living in a world that brings dreams and reality together. A dream-walker such as yourself can make the best of this, switching between the worlds to avoid certain death and to accrete magical power for the big showdown.

I never did finish it. I’ve played through over 20 times, and have the entire book mapped out. But there’s so much pure luck involved (and I don’t mean Test Your Luck or bad fortune in combat) that it just isn’t happening. But… let me back up a bit.

The game brings magic spells as a mechanic, which I totally love. You can spend Power points to scare off bugs, injure enemies, etc.

And, the boss fight can take place in the dream world or in the physical world. Aww yeah!

But it fell short of what it could have been. Very short.

Magic spell capability is only used in the first half of the book, and only 1 or 2 times. It’s really just a trick to deplete your Power, and at the halfway point where you enter the dream-reality mixture, they say “no more spells”. It’s sad to see one of my favorite mechanics just thrown away, and I would very much have enjoyed seeing magic stay an integral part to the end.

The dream fights figure prominently, but sadly they consist of merely rolling 2d6 until someone reaches 0. No strategy nor decisions, not even your Skill score nor buff items, just keep rolling 2d6. For the boss fight, you have to win 3 of these purely-random dream battles in a row, then have accumulated 22 Power (by having won these random battles previously) in order to take on the boss fight.

Phantoms of Fear had some very intriguing ideas with a lot of promise, but in places was so poorly implemented that after three days I gave up on it. 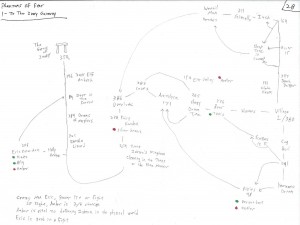 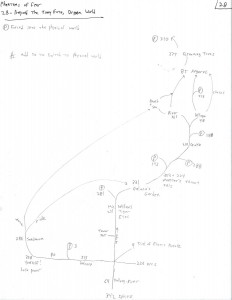 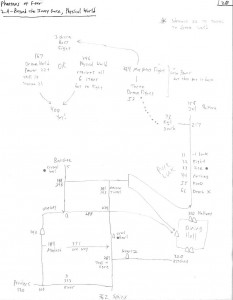 Book 28 in the series