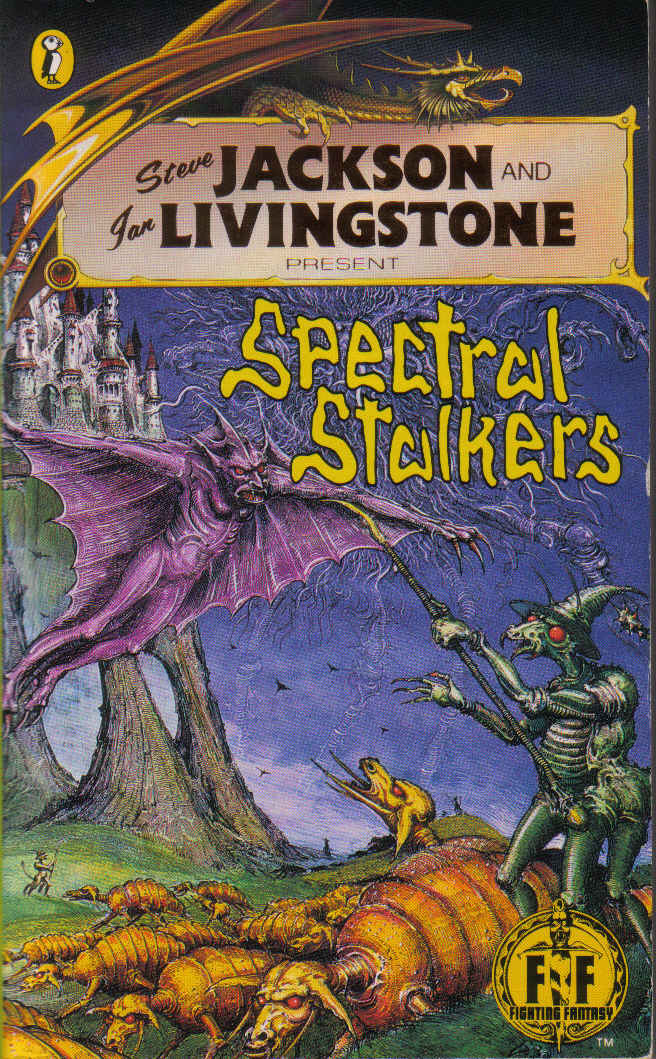 YOU become hunted prey for the stalkers when an angel falls from the sky and drops the Aleph into your care. This sphere contains the entire universe, so don’t drop it.

By the way, the Spectral Stalkers are hunting for that thing and they can smell adrenaline, so you’ll want to keep moving and avoid fights. And be sure to steal anything circular or spherical because reasons. Have fun!

When I saw Peter Darvill-Evans’ name, I was thrilled because I loved Beneath Nightmare Castle. Descriptions of hideous monsters, a theme of being hunted by things from outside time and space like in the Hounds of Tindalos, and the morning-star angel falling from the sky on page 1… a fine start for the author I think of as “the HP Lovecraft of Fighting Fantasy” 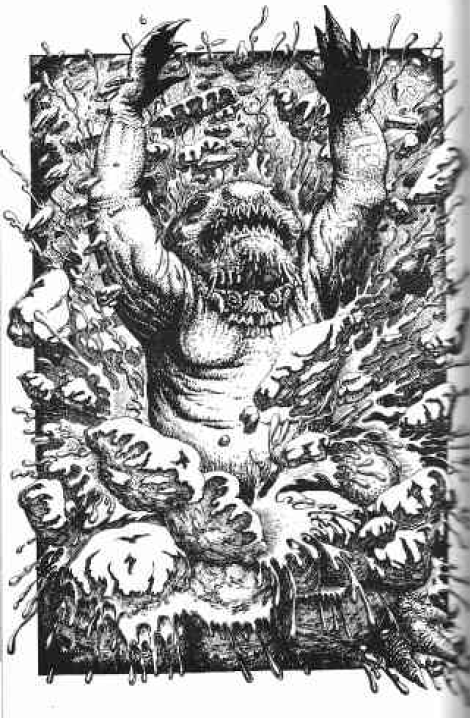 The Deep Ones have risen! Or defrosted, in this case. 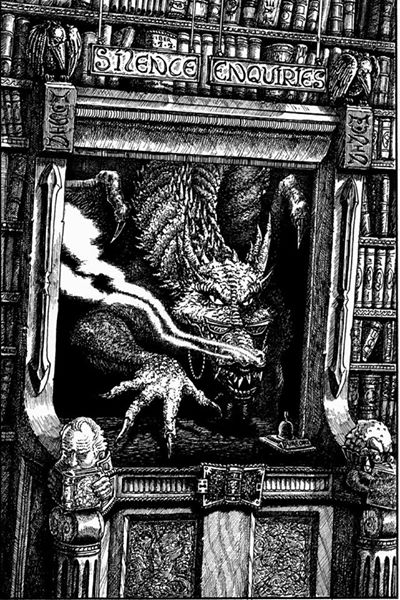 The library clerk, a Draconian American as they prefer to be called now.

The middle half of the book though, is Quantum Leap material, randomly flipping from one very brief adventure to the next, most of them being only 3-6 pages in length. I do see where this opens up possibilities for playing with canon, and it did bring in some very diverse elements from other universes such as Robby and Davros, but that sort of plot just doesn’t appeal.

But don’t get me wrong there. The three sections which are not attention-deficit world-flitting adventures, all have multiple paths which can be easy or hard depending on the roll of the dice and your collected items. You’re warned against combat, and what combat there is, is typically balanced well and is interrupted by the Stalkers before you get killed. Even at the end, there’s no typical boss fight against a 12/24 wizard, as much as reading carefully and being clever.

And the illustrations! Ian Miller is at it again, with the same illustrations that made Beneath Nightmare Castle even more horrifying. Just look at these awful things!

In the library, you’ll meet an artifact specialist and find out where to find Globus, the wizard you’re told to seek.

Then it’s off to a variety of worlds, meeting robots and vampires, wizards and scientists, elves and winged shadows. They’re too numerous to list. In fact, virtually all of this is optional since there is a viable path through the Ziggurat World.

Then you’ll meet Semeion at the center of his maze.

And finally, on to the Ziggurat World to meet Globus. There are several paths here. 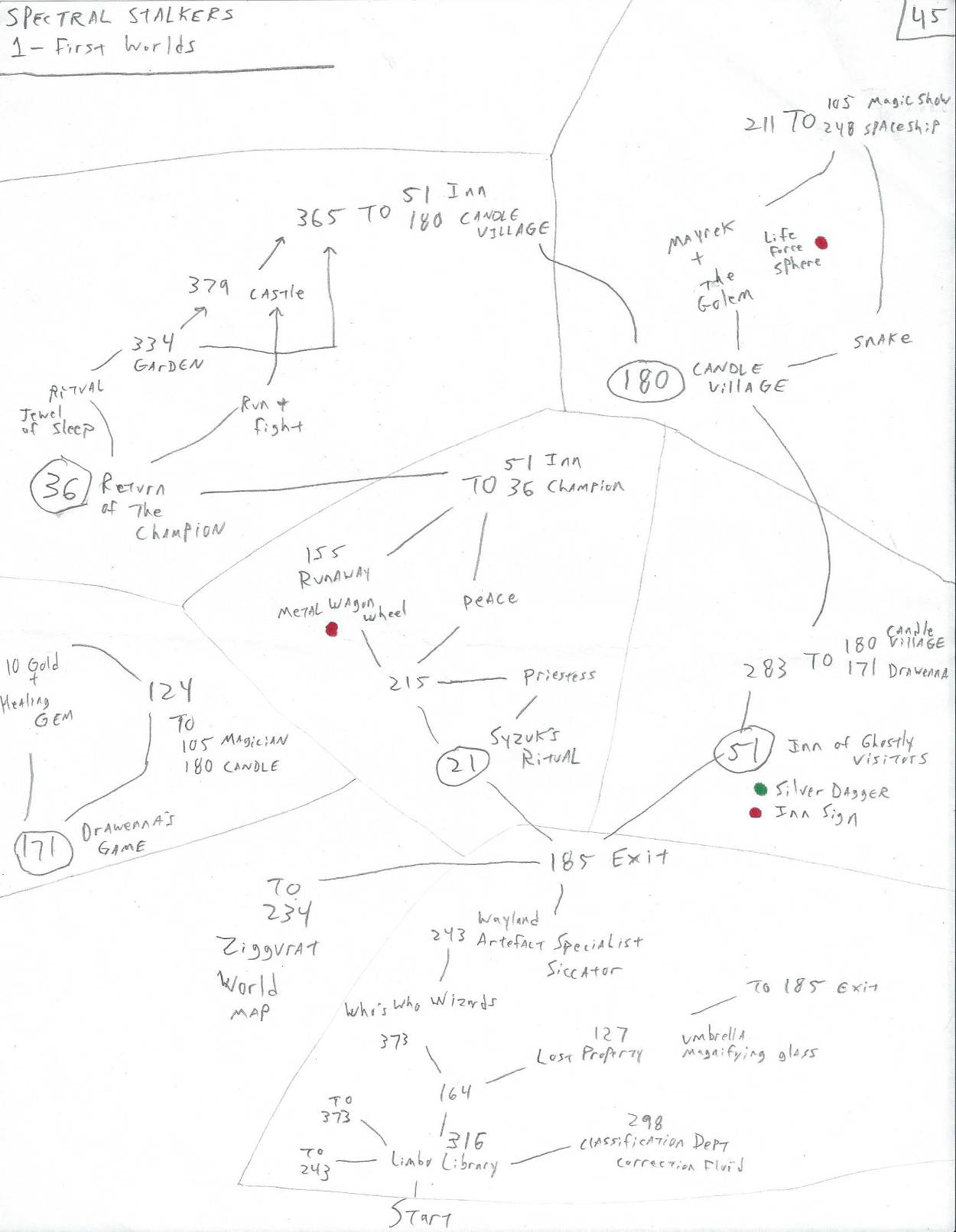 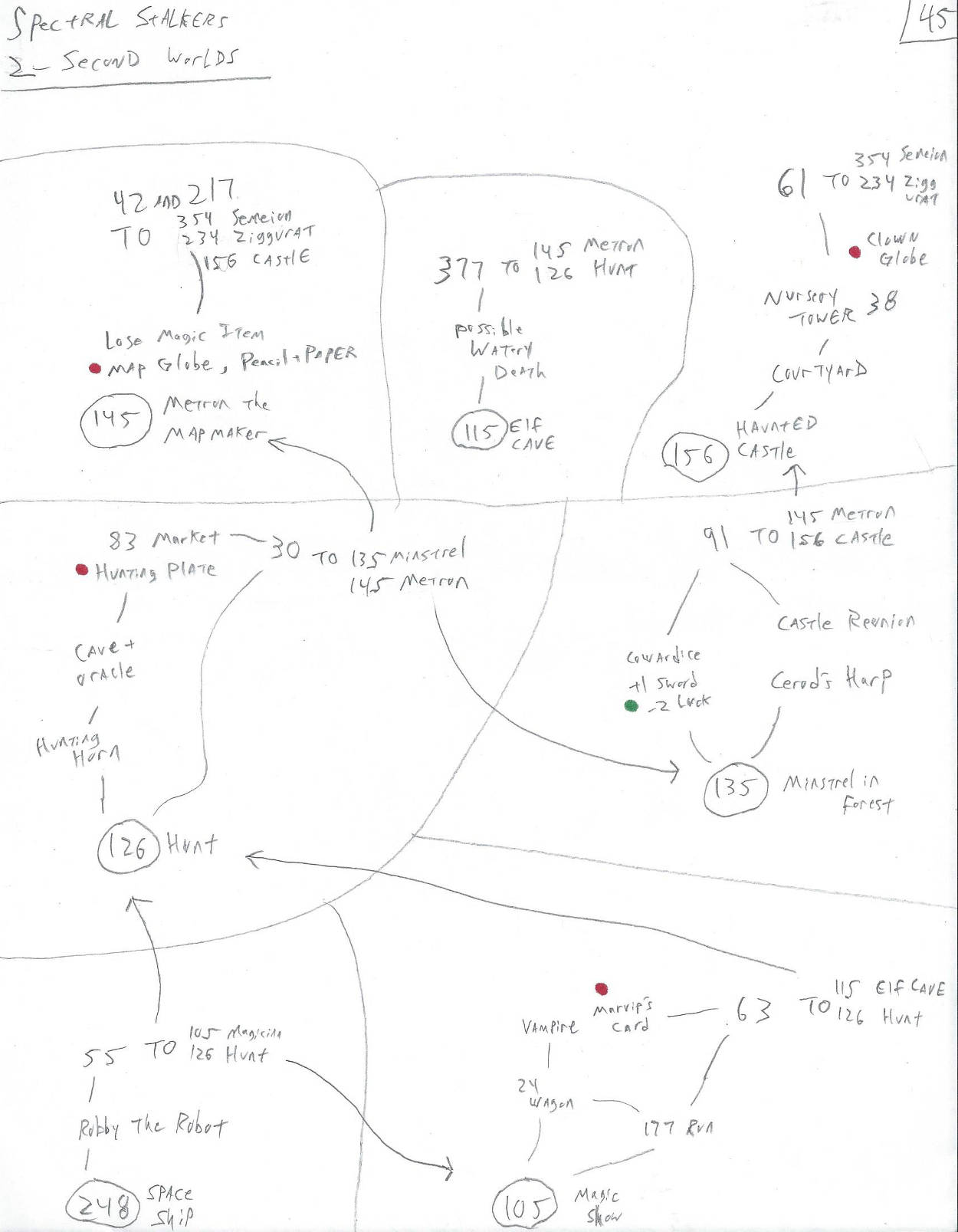 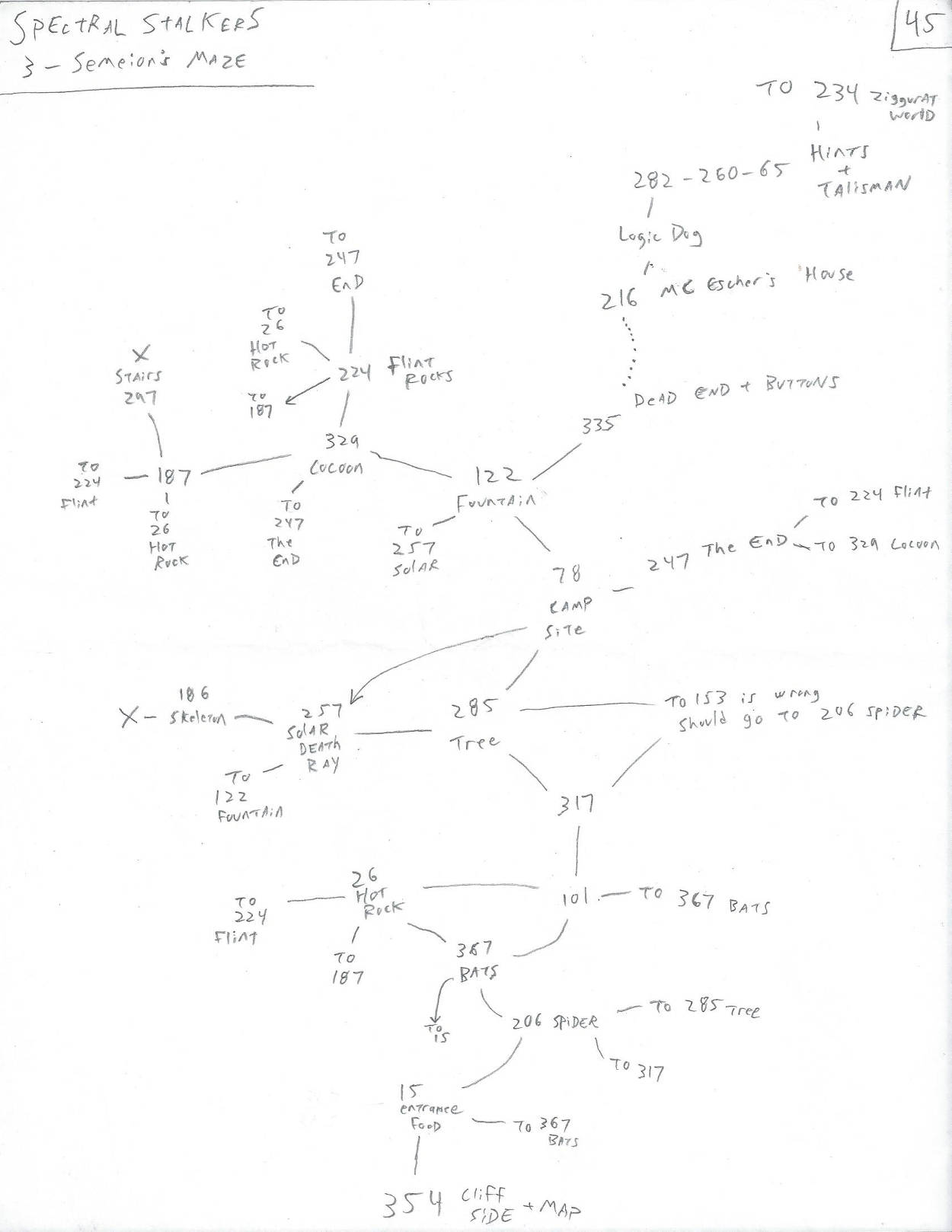 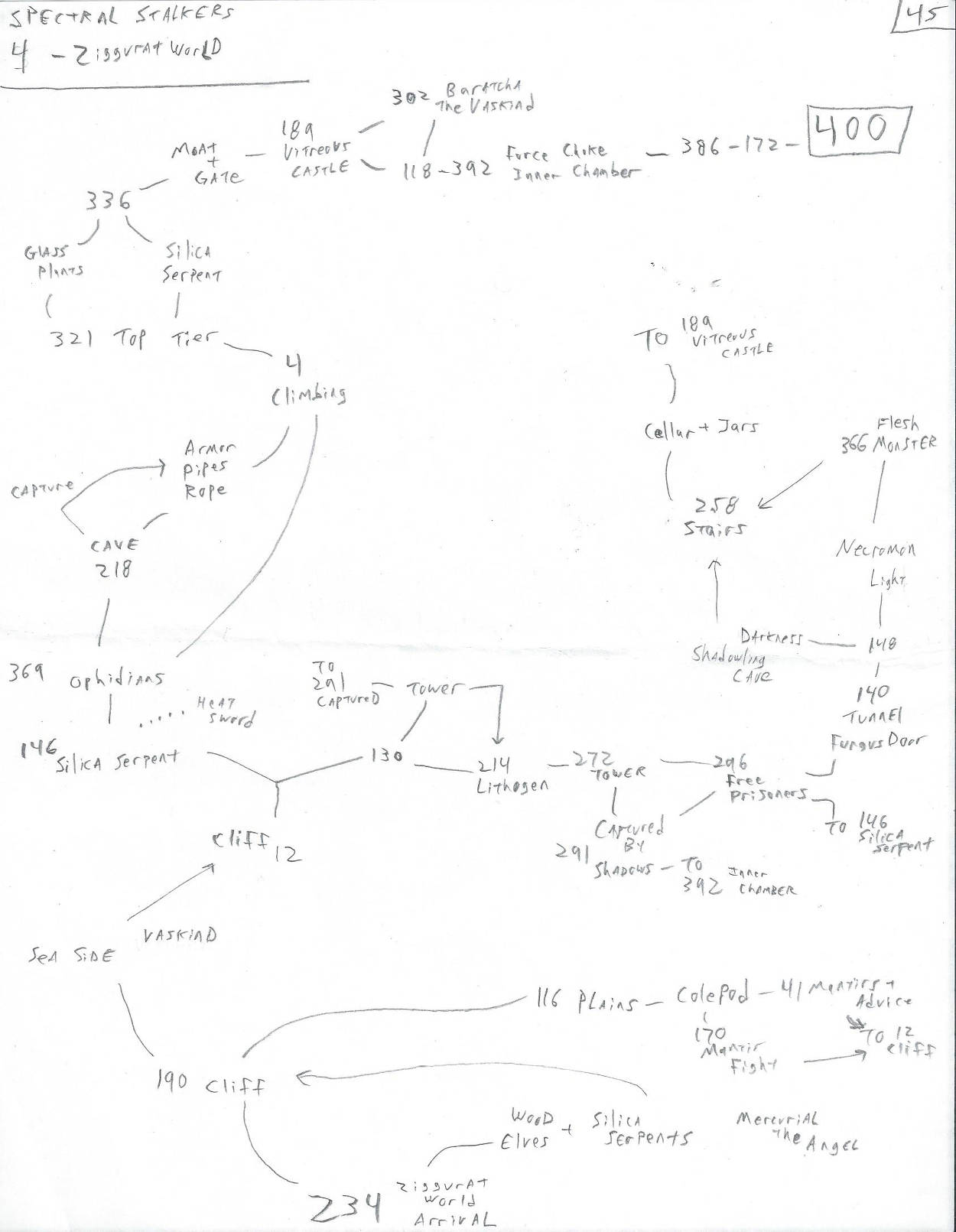 Book 45 in the series