YOU become the captain of the 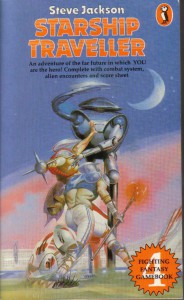 starship Traveller. And your first day on the job, you fly right into a black hole. Good job.

Fortunately, your iron jaw and stunning good looks save the day. Instead of tidal effects shredding you into your component atoms and then crushing them into a singularity, you wind up in another universe.

Your 400-page mission is to seek out the right coordinates and star date, so that flying into another black hole will take you home.

The first sci-fi-themed FF, and it tastes a lot like Star Trek! Like a lot of FFs, the key to winning is a specific combination of clues: you’ll find contradictory clues and different clues on each walkthrough, and only one combination is right. In this case, you need a Sector and a Stardate (time-space coordinates) to guess which black hole heads home.

The whole storyline is surprisingly non-linear. You can bypass planets entirely, and in many cases you have multiple routes to a planet even if you skipped it the first time. Exploring is worthwhile, because you need those clues, but it’s also dangerous.

Unlike a lot of other FFs, you’re not alone. Aside from your own heroic space-captain awesomeness, you have your crew: Medical Officer, Science Officer, Engineer, Security, and a few redshirts. The Med and Sci officers help you out of a lot of scrapes by solving your problems, but the redshirts’ extra fists are useful when you’re jumped by a gang of aliens. Combat is pretty rare, only coming up a few times in the whole book, but it’s pretty intense when it’s 3-on-3.

Your spaceship has weapons and shields, and there are different rules for space combat. But there are only 3 places in the whole book with space combat, and it’s entirely avoidable. It’s not at all like Freeway Fighter, where your car sees more fighting than you do. In fact, it’s so rare I wonder why Steve bothered with a second set of rules and stats.

But despite the increased complexity and the helping hands, and the less-linear playthrough… it’s just not satisfying. On a planet, few of your choices have any effect: you’ll usually be shuttled off to gladiatorial combat, or be given a black hole clue that’s wrong, regardless of your choice tree. There’s not a lot of combat, no buffs (well, one single Skill +1 helmet), nor information that would help you bypass danger or help you tell which clues are accurate.

Eventually your crew starts freaking out, and you will be forced to just pick any black hole and fly into it .

All told, this one was a mixed bag: neat new mechanics and a less-linear storyline, but a lot of “nah, skip it” sections and lot of choices that made no difference at all… made for a not-entirely satisfying experience. And despite the obvious Star Trek homage, it wasn’t really campy enough to scratch that itch either.

There are four spots in the book, where a Skill or Luck roll is done backwards: a high Skill and low roll gives you the bad outcome, failing to achieve. This is really silly, and in one case even gets your medical officer killed.

I thought maybe it was something clever, e.g. if you had gotten the good outcome, you miss out on something… but no, just a plain mistake. 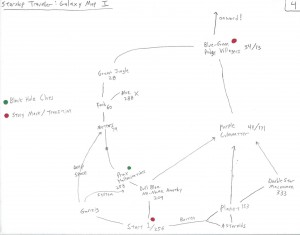 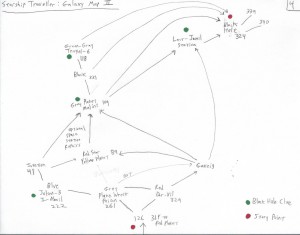 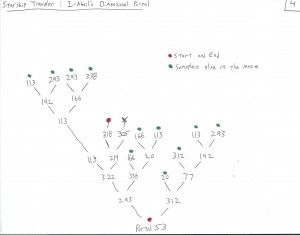