The Forest of Doom 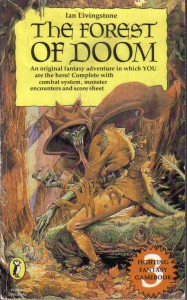 YOU become some barbarian wandering the woods, itching for adventure and blood. One night, a dying dwarf collapses at your feet and begs you to finish his quest — to search Darkwood Forest for the two halves of a magical hammer that will bring them motivation to fight back against the trolls.

Yeah, okay, so the backstory is a little weird. You’re a wandering adventurer itching to get some blood on your sword (how does that differ from a mercenary or a barbarian? academic question), and the dwarves are too depressed to fight their own war unless they get the hammer back. It’s not a super bad-ass hammer that kills trolls, just a motivational thing.

But hey, you start off with 30 GP at a wizard’s toy store, then a trip into the Darkwood Forest!

This is one of my favorite FFs so far, and part of that is two technical reasons.

Unlike a lot of the other FFs, it does not clearly break off into clear chapters (Citadel, Warlock, Rebel) but allows you to wander the woods in a less-directed fashion.

Even better, if you get to the end and didn’t collect both halves, you can just head back to Yaztromo’s, stock up, and head back in! 30 years later, we call this New Game Plus. I thought this was a great way to handle it, rather than just You Lose. Not only was it good for morale and great for exploration, but it made useful all that gold you collect during your quest.

Forest of Doom is #3 in the series, following on the heels of Citadel of Chaos. In Citadel I really enjoyed how you had a set of magics that affect gameplay, bypassing puzzles or fights, and affecting fights in unusual ways. Forest expands on that, with giving you a handful of gold and a magic shop to wander! I really enjoyed this twist on the Citadel’s “solution stockpile” mechanic.

It was unclear when you turn around and go back into the forest from Stonebridge… whether anything you killed stays dead. 171, east, north — hobgoblins or hobgoblin corpses? Fortunately, in many cases you can bravely hide and avoid combat, if you know it won’t be worth it. (and collecting junk can be useful for those Bandits; I figure there’s an infinite supply of bandits so they kept coming back on each return)

Yaztromo sells a Potion of Healing, but I don’t see that this has any use at all. A Potion of Strength restores your Stamina, and would be useful, but that’s not what it’s called. Maybe that was just a typo since Ian & Steve were still new? Starter potions of Luck and Skill would have been neat, too. 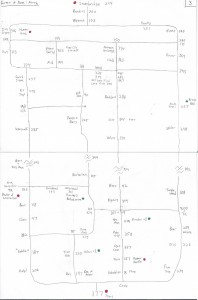 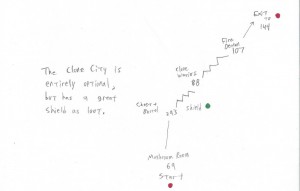