Fire On The Water 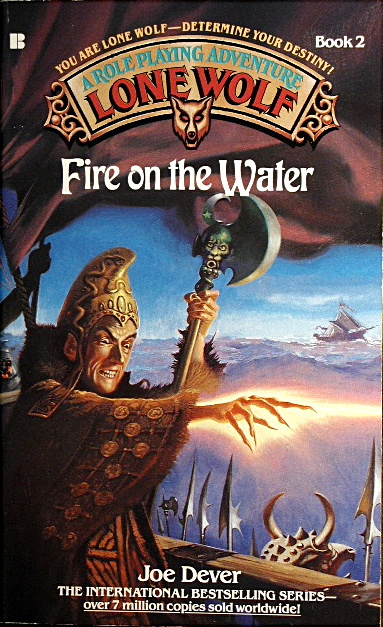 YOU become a courier on a mission to fetch the Sommerswerd from the neighboring kingdom to the east.

After that big battle with the Darklords a zillion years ago, the kingdom of Sommerlund (which is adjacent to Mordor)  gave away the evil-quenching Sommerswerd to the kingdom of Durenor to the east (located safely far away from Mordor). Why would they give the magic sword to another place, far away from the evil that the sword dispels? We’re not sure. Maybe we forgot to go Christmas shopping and panicked?

Anyway, now that the legions of nasty monsters are invading in force, so it’s time to go get the sword back. That’s where you come in, Lone Wolf.

Another good, solid adventure. It’s a direct sequel to Flight From The Dark, where you’re standing in the throne room and head down to the quartermaster for some gear before you take off.

As is often the case with game books, the quartermaster is stingy! I need to choose between a weapon or else food; is it really too much to ask, to stuff my backpack with food and also give me a sword, so I can save the kingdom? Thank goodness I took the liberty of healing myself between books, or I would have had to ditch the food for a single healing potion.

Fire On The Water ramps up the difficulty from Flight From The Dark’s “tutorial mode” difficulty, to being a challenging adventure. I must have taken 20 tries to find that Magic Spear and survive this to the end. When I finally did win, though, I largely credit my 19 combat skill at the time — previous playthroughs with 12 and even 10 (the lowest) often ended miserably and quickly. One such, actually had me dead on the sixth page from starting, due to combat.

There is one must-have item to get to the end, and there are so many ways to get there (and a few ways to think you’re getting there, when you’re not) that it kept me replaying for several nights. There are actually two completely different versions of Ragadorn in here! This complexity and depth of the internal map, kept the game interesting through the many, many ignominious deaths suffered by Lone Wolf.

Only one thing bothered me about this book, aside from the seeming impossibility of finishing it without a 16+ combat: the number of choices that don’t do anything. Take the trail: it goes nowhere, so back to that bridge on the previous page. Draw your sword: put it away and apologize, then the guy attacks you just like you knew he would. Have superpower get a buff, otherwise read about the very same buff a page later. It’s as if they were trying to artificially inflate the story up to 350 pages, having run out of story at 300?

When you try to kill someone for a a ride to Ragadorn (313), it says that you are unarmed and you instantly die. Why would I be unarmed?

When you enter Ragadorn via caravan (37 and 148), the two pages have different names for the streets on 323 and 122 (Westgate and East Bank). It’s not clear which is correct, nor that it matters since in both cases it’s “the street” which connects to some other destination.

At the North Star Tavern in Ragadorn (4), you can stay the night and meet an alchemist who wants to buy the Seal of Hammerdal. If you got here, though, then the Seal was stolen and you may or may not have recovered it.

When you arrive at the inn (39), it costs 3 gold if you don’t have a coach ticket. If you don’t have a ticket, you’re turned away without the opportunity to pay 3 gold.  I suppose this is because you’re supposed to gamble until you are flat broke, but still… 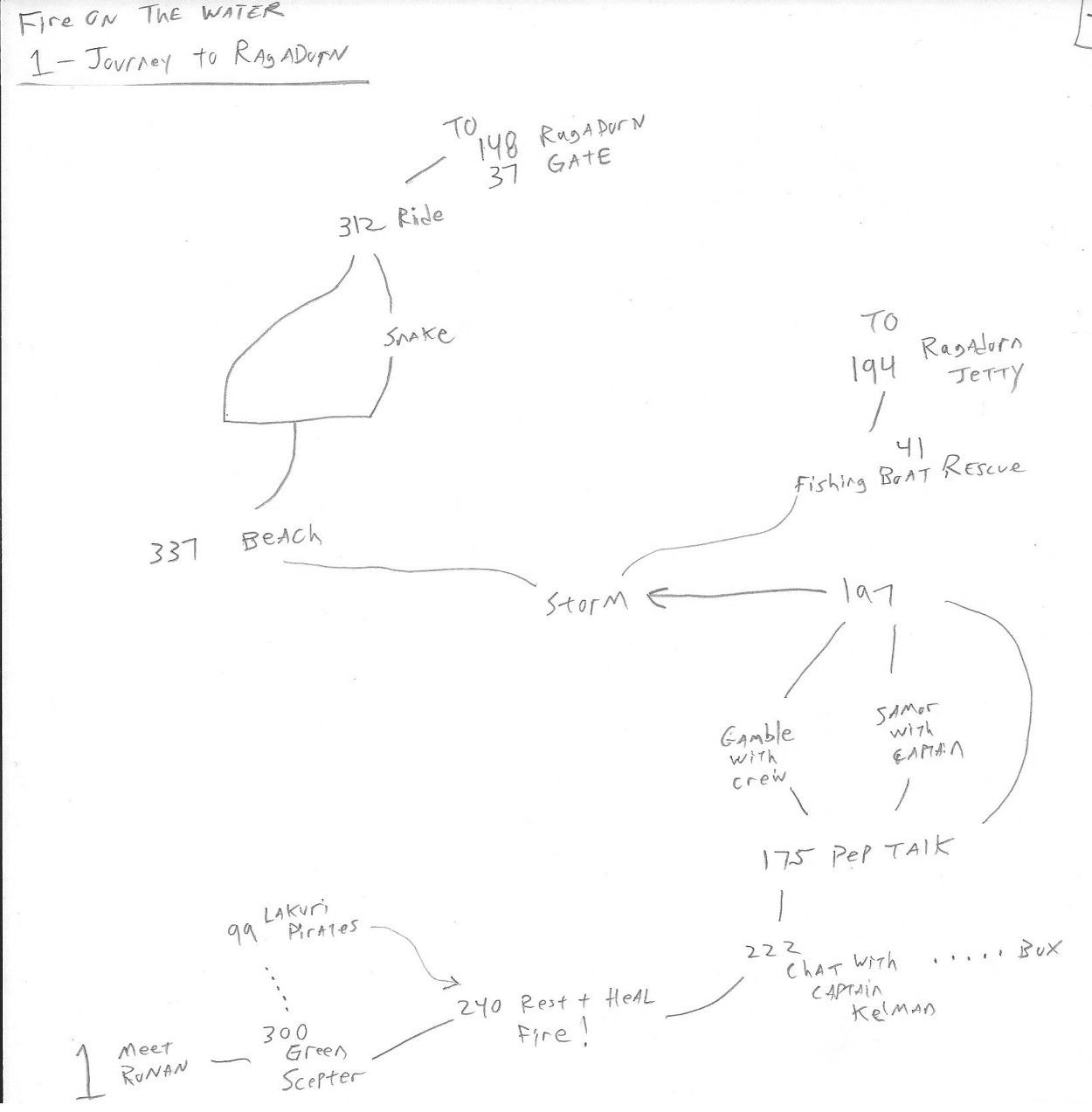 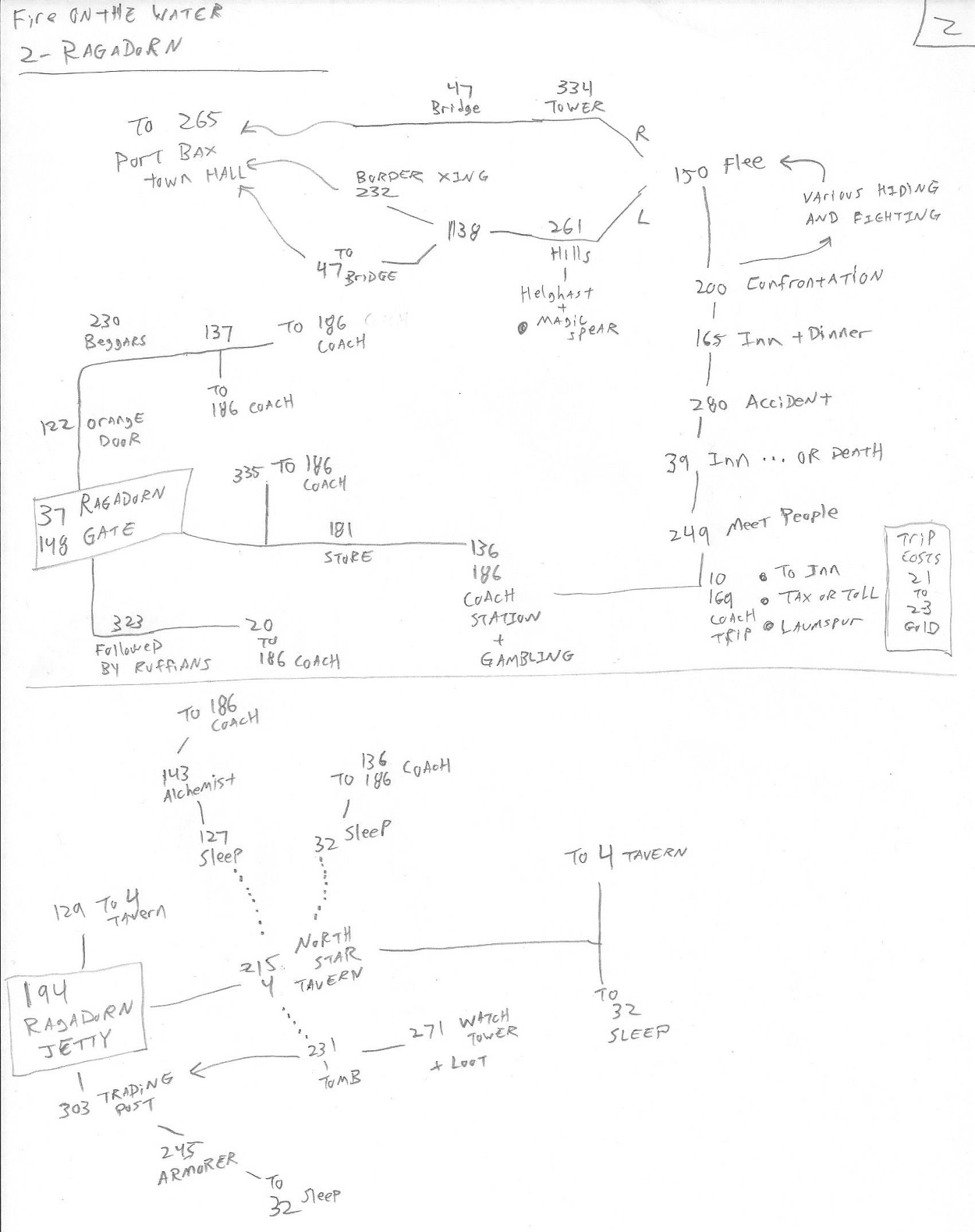 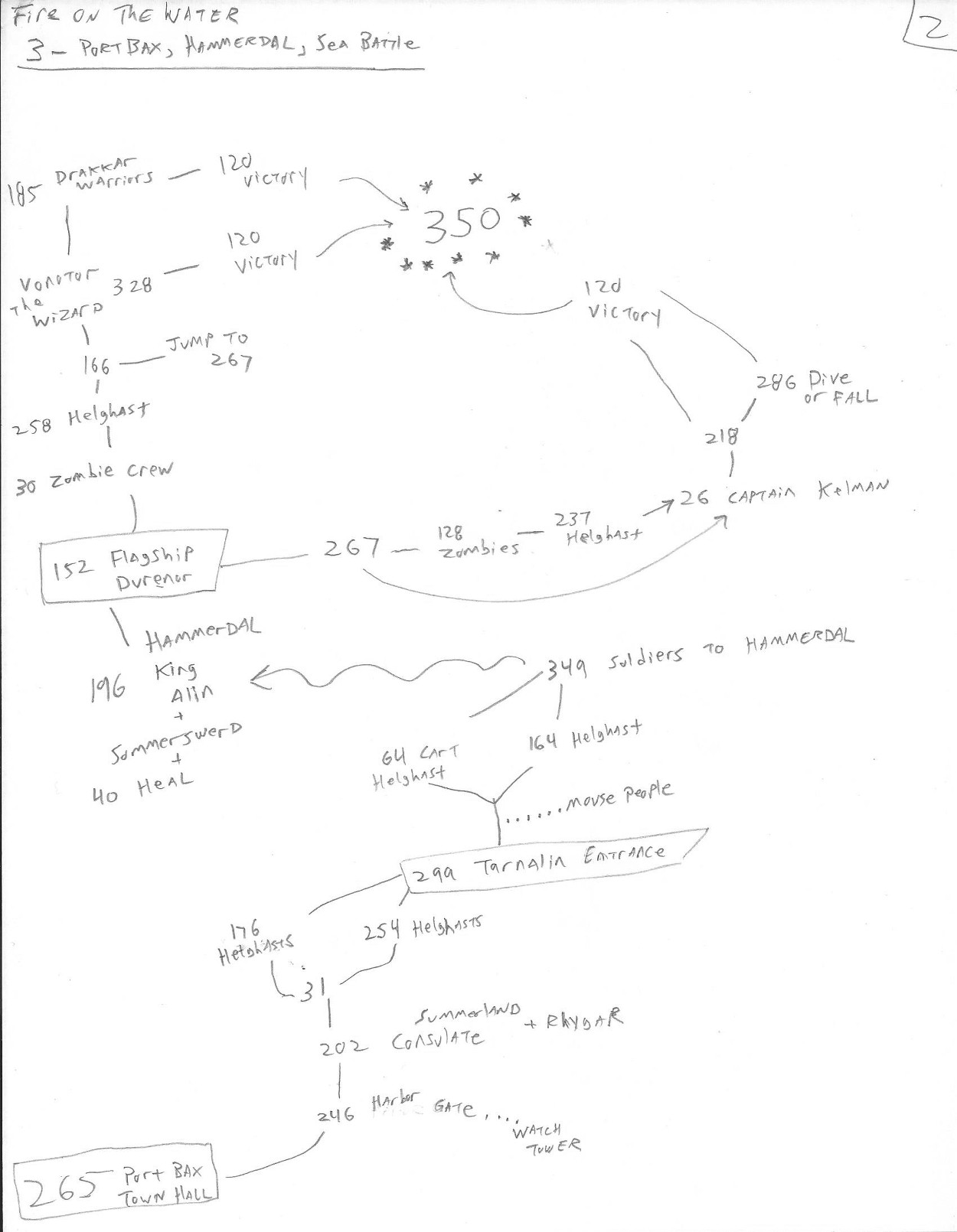