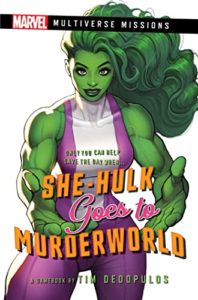 YOU become the paralegal assistant to Jen Walters, a lawyer also known as She-Hulk. She’s in the San Francisco Bay Area for a case, and wants you to help make her decisions. It’s a bit weird, right, that she would need your advice on anything legal as well as your advice on superheroing. But go with it.

A retired super-villain is in jail for murder, and has asked She-Hulk to defend her in court. Bold move, right? And right off the bat, we’re re-investigating everything that the police didn’t even bother to look at. Can we bring enough reasonable doubt to save Ruby?

Depends on whether you survive the attack by a vampire cow.

The writing is very fun and very enjoyable. The characters are likeable and there’s a lot to explore.

As a game, though, it’s way too easy. Our Reasonable Doubt score was over 20 by the time we even visited our client in jail, and our stats are all over 10 now. As such, every roll a success and we haven’t lost a fight nor failed a test yet. Partly it’s because almost every door has a reward and almost none have a drawback, and none of them preclude taking the other path: visit their home or their office? Both, and get double rewards.

I’m still playing through it some more, so this is an opinion in progress.