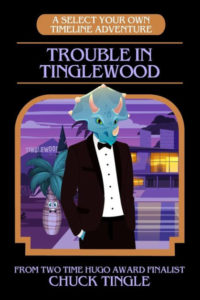 YOU become a starry-eyed newcomer to the City of Devils (not to be confused with Los Angeles), where you hope to make it big in show business. Or in television. Or maybe sculpture. You’re not sure of the medium, but you’ll figure that out as you go. You have a story in your heart, and you’ll share it with the world and see your name in lights… maybe.

Meet a movie star. Become a famous artist. Become a grizzled barbarian film-maker roving the desert. Stop a serial killer. Be killed by a serial killer. The City of Devils is a big, crazy place and just about anything can happen in the Tingleverse.

This second Select Your Own Timeline has come a long way since the first one, Escape From the Billings Mall. Trouble in Tinglewood has about 50% more pages, a lot more links, and many more endings. It also features a lot more locations around the City of Devils: movie sets, brutal desert, suburbs, burger joints, motorcycles, …

The writing is fun, and I love Chuck Tingle’s other work (“tinglers”). The Tingleverse is full of weird characters, situations, and settings ranging from slightly surreal to outright goofy. And the writing and the game system are not complicated, so it’s suitable for when you’re tired after work. And like the rest of the SYOT series, there’s no pounding (if you don’t know what that means, look up Chuck Tingle) so it’s safe for all audiences.

Trouble in Tinglewood is a really fun time, and has brought me many evenings of enjoyment.

On 22 and 91 when you’re coming down off your trip, the second option should be to accept help, but it says decline. 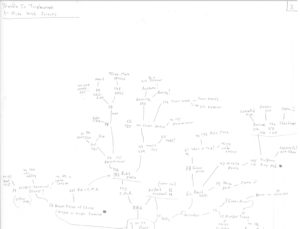 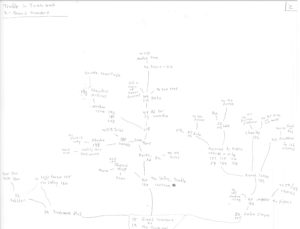 Book 2 in the Select Your Own Timeline series