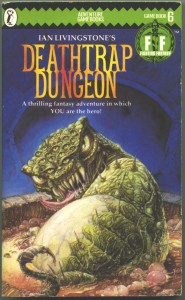 Mr Lizard, your butt is not going to break the Internet.

YOU become meat for the grinder…. Baron Sukumvit is a sick weirdo, who lavished a fortune on building a maze, filling it with traps and exotic monsters, then sending his retinue of guards into it. Encouraged by the total extermination of his squad, he hung out the sign: Open for business. 10,000 GP if you survive!

What sort of dummy would walk into a deathtrap dungeon? You!

This is possibly the most successful FF book of the whole series. Baron Sukumvit is mentioned in dialog in other books, and your conquest over the Deathtrap Dungeon is the setting for Trial of Champions and Armies of Death. They made a video game of Deathtrap Dungeon way back in the 90s, and later in Fighting Fantasy Legends Portal.

But I’m not sure why it gets the high praise. It wasn’t a bad book, but was a real no-frills dungeon crawling adventure. It’s not an epic magically-assisted epic quest spanning a continent; it’s a dungeon crawl with one winning path and a scavenger hunt. If you’re lucky you’ll find your way to a gauntlet of five monsters in a row and just have to slaughter your way through them in sequence.

Not awesome, not awful, but a fun way to spend a few afternoons. 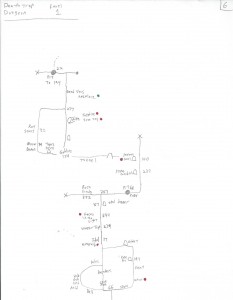 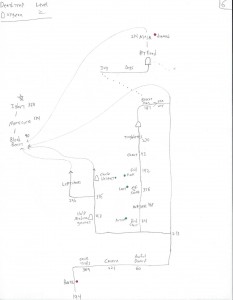