Sword of the Samurai 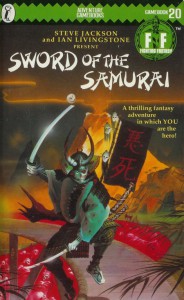 YOU become a samurai, the hired muscle and champion of the local shogun.

The Shogun of Hachiman gets his power from a magic sword named Singing Death, but the sword has been stolen away to the Pit Of Demons by a shadowy figure named Ikiru. While Ikiru can’t yet use the sword for his own powers, the Shogun’s powers are waning. Barbarians have been raiding, villagers are becoming insolent, and the local lords are bucking to usurp the Shogun entirely.

You are your Shogun’s champion, charged to bring back the Singing Death, end this destructive conflict, and bring order to the galax… to the demesne.

This one was quite a lot of fun, even if by virtue of  being perhaps too easy. I found one solution after only 4 tries over the course of 2 hours.

The game play is fairly basic: no potions, no gold pieces, no pieces of a code to collect and decipher, no 3 keys at the end. But it does introduce two new elements that completely change gameplay: Honor, and a Special Skill.

Honor is a new statistic. It starts off at 3, then goes up and down as you act your part. If you back down from a fight or forget that you’re better than everyone else, you lose Honor; if you punish insolence but reward goodness, you gain Honor. If your Honor hits zero, you commit seppuku. If it gets high, though, you can moxy your way out of some situations.

You choose your Special Skill at the start: Archery, Acrobatic Jumping, Quick Strike, and Two Swords. Many of them have applications in combat, but at some points in your adventure they can change your path in neat ways. Acrobatic Jumping sounds really goofy, but there are at least two spots where it gets you out of a jam and changes the dynamic.

Sword of the Samurai does reintroduce Provisions, which means you can heal any time you’re not in combat. I say reintroduce since the last few books I’ve played (Freeway Fighter, Rebel Planet, Citadel of Chaos) have not had this.

I found my first solution after only a couple of hours, then spent a second evening finding the other routes; there appear to be an easy way and then a tougher, more honorable way. Along the way, I was:

My eventual success was largely on account of having rolled a Skill of 12 and thus being able to beat my way through most problems including the Tourney Of The Planes. With a lower Skill this would have been very difficult indeed, and I probably would have needed the extra help from taking the longer path. This is why I really do play these books repeatedly and figure out every path; I really do get my money’s worth out of these books!

The Tourney Of The Planes

The Tourney Of The Planes consists of 4 battles: three pets, then the Dai-Ono (demon) himself, then usually his ghost. You can pick up allies before you head into battle, assuming you got the prerequisite items or honor points. You likely won’t get the perfect trio, and may end up feeding some of your allies to the beasts ineffectually. See Victor’s comment below for more information. 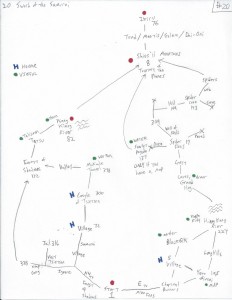 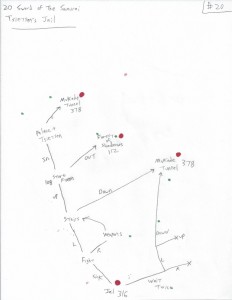 Book 20 in the series