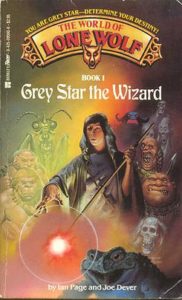 YOU become Grey Star the Wizard, protege of the ancient and mysterious Shianti wizards.

The wytch-king Shasarak rules the Shadakine Empire, where nobody is happy. The magical Shianti would love to do something about it, but they are forbidden to interfere with human affairs. So, when someone left a baby on their doorstep they saw a great loophole – raise that baby (that’s you, Grey Star) and teach them magic, then let them do the interfering!

The plan is simple, too: find the Kundi people who may or may not still exist on the mainland, have their shaman find the Shadow Gate so you can go to the Daziarn Plane (same dimension as in The Prisoners of Time), so you can get the magic stone, which something something TBD McGuffin, will defeat the wytch-king, end this destructive conflict, and bring order to the galaxy.

Step one: Go to the mainland, and find this near-mythical race of lost people.

The whole game is interesting twist on the familiar Lone Wolf mechanics, and brings with it one of my favorite mechanics from any game book: magic. You have a limited number of willpower points, and using magic or being psychically attacked drains them. Sometimes magic can get you out of a scrape, and sometimes it’s just a waste of magic points telling you what you already know. Aside from magic, Grey Star must also pay to fight — using the wizard’s staff in combat costs at least 1 willpower point every round of combat. So there’s resource management throughout the story, in addition to the writing and the adventure.

The plot is the usual Chosen One McGuffin quest against the evil emperor thing. It’s pretty typical, even trite.

The internal map has very little variation and is almost a straight line, and most decisions don’t really matter except to trick you into wasting willpower points.

The overall difficulty is questionably balanced. After several tries, I finally just gave myself 19/29/29 so I would have a fighting chance, and finished with 3 endurance and 1 willpower point. With lesser stats such as a 10 combat, I doubt it would be even remotely possible to finish. So, take my advice and just give yourself 9s.

The writing is pretty good, with memorable characters who hang around long enough that it’s legitimately sad when they die.

And it was fun enough that when I finished… I opened up book 2 on the spot and kept reading into the night. 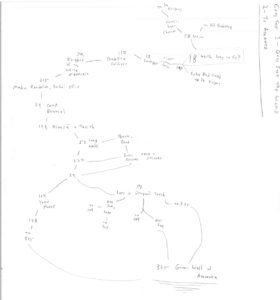 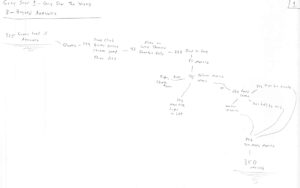