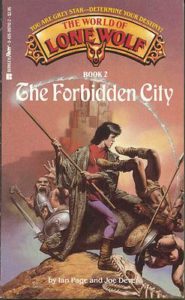 YOU become Grey Star the Wizard and and at the end of book 1 you were torn up, exhausted of magic, and doomed to be eaten by giant mantis creatures… immediately before you were rescued by the Kundi people you had hoped to find.

The Kundi shaman says that the Shadow Gate will appear for one night only, in the Desolation Valley past the Forbidden City. It is there that you’ll find the portal to the Daziarn Plane dimension (where Lone Wolf was trapped in The Prisoners of Time) to find a magic stone and defeat the wytch-king Shasarak.

But it’s a long walk from the forests to the marshes to the forbidden city of Gyanima. Shasarak knows you’re coming, and has an empire standing against you, as well as some darker magics.

Somehow it’s not as engaging as the first one, for two reasons.

First, there are fewer different settings. A swamp, a city for ten pages or so, walking across a plain, a second city for five pages or so, then the craters at the end. It’s just not as engaging.

Second, most choices don’t make any sense. Check out the map and see how straight it is. Almost all of the choices are little more than a trick to see how much Willpower or Endurance you’ll burn before turning to the same page anyway. All gamebooks have common connection points, but many have a lot more branching and diversity than this one.

Aside from that, the difficulty is just crazy. In the The Dead Lands, you are beset by a gauntlet of deathgaunts and nightmares which sap both your willpower and endurance. If you have under 18 willpower you instantly die. And if you have less than 20 Endurance you’ll die when you get to the city and are too weak to cross the river. Your only hope of survival is to have both Evocation and Alchemy so you can ward them off.

As long as you cheat and give yourself all-9s for stats and Evocation and Alchemy as required skills to win, it’s not all bad. Some parts of it are amusing, some scary. You’ll make your way through swamp and battle and ruins, meet new friends and rejoin old friends, and watch lizards wreck Shadakine soldiers. And even the awfulness of the Dead Lands does at least lay on the atmosphere nice & thick.

On page 1, it’s not explicit how much you’ve healed. The book describes that you have healed every scratch, but doesn’t explicitly say to restore your endurance. It also doesn’t mention how many willpower points you recovered, though at the end of book 1 you spent your very last willpower point. So I gave myself a full heal, because that sounds right. It’s also barely enough…

On 64, if you use Prophecy to look at the intersection, you don’t get the option to go west to 37.

Page 248 is missing the option to search the banquet hall on 94. 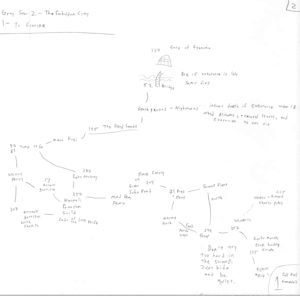 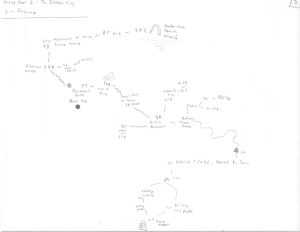