War of the Wizards 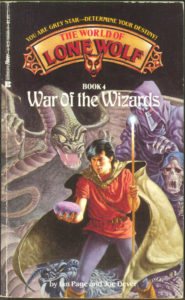 YOU are still Grey Star the Wizard… as you return from the not-so-mysterious Daziarn Plane with the magic rock in hand. That took three books to accomplish step two of your plan. Now it’s time make your move on Shasarak the Wytch-King, to assassinate him and make the world a better place.

But it won’t be a simple sneak-and-stab sort of mission.

First, the portal dumped you in a desolate valley inhabited by a horde of demons, so you’ll have to clean up that mess first.

Second, the Freedom Guild has turned from a ragtag band of anarchists into a full-blown multi-city revolution, so the whole countryside is at war. You’ll need to meet up with the army and join that assault in order to get close. Hey, finally an element of a gamebook that makes sense – send in the whole freaking army!

A decent capstone to a somewhat disappointing series.

I have been complaining in the first three books about the fairly lazy structure that almost every choice makes no difference except to cost willpower. Here, the choices do matter because they determine how many fights you get dragged into. Because of that, the difficulty of this book can be fair or can be nigh-impossible. It’s not quite the same as a complex and branching narrative, but more like making tactical choices to win a battle.

Some bits of the book don’t make sense, though. In the start they mention that you’ll be given a choice when to teleport to Shasarak, and at that point too you’re given several options that don’t even make sense (this skill, that skill, a potion, or the moonstone which we know you have; duh). If you don’t take that opportunity, the next page is fighting some undead and then “so, you decide to teleport anyway.” Kind of a waste of potential there. Turns out too, that the guardian demon just ignores you and you can walk past it. Really weird.

Then there’s a straight fight, and close the portal, and done.

WotW did have three parts I really enjoyed:

Samu! He’s alive and well, and has met up with other surviving Masbate.

The Kazim. The Kazim stones are not supposed to be mind control crystal balls, and the owners want them back.

The routing of the Shadakine army. A few paragraphs, but very satisfying. And finally, out of literally scores of gamebooks I’ve played, they sent in the whole dang army! So many times “we sent in a team, they vanished, we’ll send you solo, kthxbai!” Not this time! I can appreciate that.

So I’m kind of undecided whether War of the Wizards was dull, or that I’m fatigued after three other books just like it. I think that for a story arc to engage me for four books, the arc needs to be very well done and each individual book needs to be well done. Freeway Warrior had enough material for two books or one double-thickness book, and honestly I think Grey Star would have done better similarly as well. 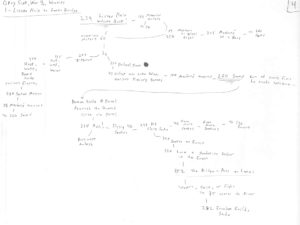 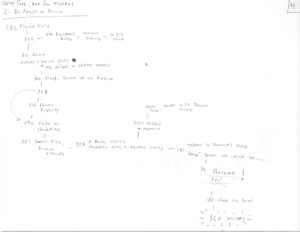