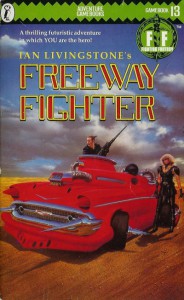 YOU become a road warrior. It’s the year 2022, and Mad Max 2: The Road Warrior is either a training video or a historical documentary. The village of New Hope has sent you across the desert to pick up a tanker full of precious gasoline.

It’s time for a lethal roadtrip, in your Dodge Interceptor armed with armor, machine guns, oil  slicks, and road spikes. You’ll be set upon by bikers and ne’er-do-wells of all descriptions, you’ll trade away valuable medical supplies for car repairs… and you’ll run out of gas. A lot.

So hit the road already!

This book was hard, but not too bad.

Perhaps the biggest annoyance that other folks have reported in their reviews, is the gas check. Now and then you’ll be asked “Do you have a full gas can?” If not, then your mission is over! Though this mechanic has caught a lot of flak from other FF fans, fact is that other books had you get all the way to the end before you find out that you lose anyway  (the Warlock‘s keys, Balthus Dire‘s combination lock, Deathtrap‘s gems). The up side of running out of gas, is that you got stymied fairly early on instead of getting all the way to the end.

This book introduced a new mechanic that really shook it up: three types of combat. Nonlethal unarmed combat leaves you unconscious after you lose 6 Stamina: you won’t necessarily die if you lose, but your mission may be seriously jeopardized. Combat with missile weapons (guns) is fast and furious: instead of 2 Stamina points per injury you lose 1-6, and in a lot of gun battles you’ll permanently lose Skill if you’re injured. And then… car to car combat with machine guns: your car has Armor and Firepower stats, and engages in combat much as you yourself would. But if your car is destroyed, you’re barbecued in the wreckage.

This distinction is quite relevant: On my final playthrough I had 12 Skill and 7 Firepower, which meant that my car got torn up every time I got into car-in-car combat and I got to San Anglos with only 1 Armor point left — but when out of the car I dominated fistfights and gunfights handily.

Rockets. Your car has oil slicks and road spikes for certain situations, but also rockets that can be used as Get Out Of Combat Free cards. By my calculation you need one rocket to get through the gauntlet and two if you free Sinclair, so that leaves two to bail on combat when you’re outclassed. If you have a Firepower less than 12, this is good, cuz there’s a lot of car-on-car combat.

But despite these cool new mechanics, and a welcome deviation from swords and wizards, it wasn’t really satisfying. The writing felt quiet uneven here. The climactic Blitz race is easily bypassed but is essential, and has nothing to do with decisions and little to do with Skill. The Doom Dogs assault relies way too much on Test Your Luck instead of skill and choices. The trip back home consists of one fight and perhaps getting bubonic plague at a motel. The book is only 380 paragraphs and not the usual 400, giving me the impression that it was rushed through.

A good time, but with flaws that made it not a great time. 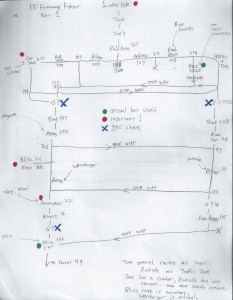 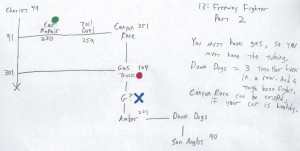