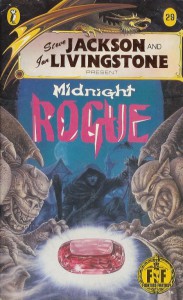 YOU become a no-good dirty thief. As your initiation into the Thieves’ Guild of Port Blacksand, your job is to steal the Eye of the Basilisk, a precious gem in the possession of a local merchant.

But of course, it wouldn’t be your initiation if it were easy. First you need to track down the merchant’s office and his home, to find where the gem is hidden. And it’s not in a safe in a nice, comfortable office but at the end of a tomb, protected by undead and spirits and golems! Oh my!

The worst of the FF books I have read to date!

The first part (in town) is okay, a bit of strategy and thought involved in whether to explore and how to do so safely. And then you add your three clues to move onward, and the adventure starts.

And the writing seemed lazy overall. When there were choices, they fell into two categories: a dead end where you turn around or instantly lose, or else it makes absolutely no difference. The clue you can buy at the Rat and Ferret just repeats what you know from Page 1. The final decision as to where to continue searching (144) has three throw-away options that you’d never choose anyway. There are connectivity errors I mention below, which make your gold completely useless anyway. And the “maze” in the dungeon is just two Test Your Luck rolls.

I played through it in about 2 hours, which doesn’t mean I’m an awesome player or a clever cheater… but because it’s a straight line with no potential at all to wind up in the wrong place. I played this book on the heels of the very disappointing Thief video game… but was equally disappointed.

But, not everything about it is negative. It introduced thieving skills which really do affect gameplay, much like the ones in Sword of the Samurai. If you don’t have Pick Locks, you can’t open the safe! And if you have Spot Hidden you’ll notice that trap. And if you lack both Secret Signs and Spot Hidden, you’re stuck! These had a lot of potential… but were wasted by the poor level design.

In the spider cavern, if you’re bitten by the spider, you’re instructed to turn to a page, lose Skill and Stamina from the venom… then turn to the page where you narrowly dodged the spider in the first place, rather than back into mid-combat.

There is no way to revisit The Noose once you head to the Merchants’ Guild or the Residential Area. Since the Residential and the Guild have connectivity, it hardly makes sense that The Noose becomes inaccessible. Besides, there’s a vital clue there!

At the Rat and Ferret, you can play the knife game for 5 gold. But you only started with 5, paid 1 just to get in (assuming you didn’t meet the beggar or fortune teller and pay them), so can’t possibly have 5. This means that if you lose the contest you cannot possibly pay them. (there is plenty of money in the other 2 parts of town, but see above)

There are 7 skills. I consider 3 of them to be very important, and some of them you can acquire if you didn’t have them when you started. 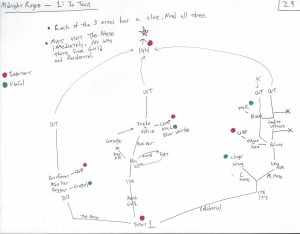 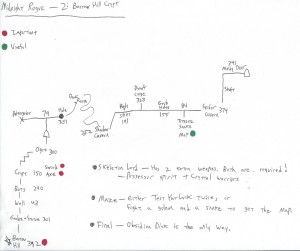 Book 29 in the series