Beyond the Nightmare Gate 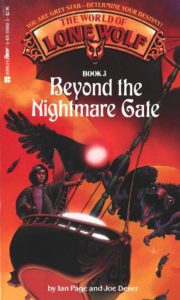 YOU continue being Grey Star the Wizard on a quest for the magical Moonstone which can defeat the big bad wizard emperor. In book two, you found your way across the swamps and to the Shadow Gate, and here in book three you delve into the mysterious Daziarn plane, a world of mystery and dream and illusion even to the magical and fantastic world of Magnamund.

Ask the advice of the Academicians, learned sages and inventors harvesting the essence of this most magical of magical realms in an otherwise magical universe!

Sneak a statue and a gem from the city which guards it!

Put out a fire that your evil twin caused!

Then get the Moonstone in a final showdown with your evil twin!

I wanted to like this one, but honestly it wasn’t that great.

The idea of the Daziarn plane, featured previously in Lone Wolf 11 The Prisoners of Time, appeals to me. I like the idea that even in the world of Magnamund with magical creatures and the living dead and alchemists and wizards… there’s a world of fantasy and weirdness beyond that, where demons and gods are the most familiar of the entities. But sadly, the Daziarn plane isn’t like that at all – it’s just a dull greyness with ordinary people in ordinary cities. There’s a flying ship, basically the same as we have back on Magnamund, and ordinary fetch quests. There is one illusion demon, the Chaos Master from Prisoners of Time, but there’s really nothing you can do about him. He blusters a bit, then gives you an evil twin just to be a jerk, and bye-bye. That’s as mysterious as the Daziarn Plane gets.

And as with the other Grey Star adventures and later Lone Wolf, the map is mostly linear and with very few choices, and most of them are just to trick you into spending a willpower point before you turn to the same page as the other choice. Simply by following my usual behavior of “be nice, no fighting” I won the book on my first playthrough. So I can’t give it many points for creativity or complexity. On top of the rather flat atmosphere, honestly I found this book boring.

Well, except for one chapter: The Singing City. This is by far the most complex chapter of the book, where you can walk in and ask nicely, or sneak and slaughter and steal. That part is pretty cool, that finally here’s a choice that changes the plot for more than one page! The illustrations are nice, too, and I really enjoyed this chapter. Sadly, the rest of the Grey Star series doesn’t keep up this same quality.

So yeah, a boring location, a straight line of burning willpower points, only a few combats, and few choices that matter. Yawn.

Oh, by the way, there’s a big plot twist: don’t kill your evil twin, or else you’re the one that dies. Fortunately, Tanith tells you that several times. 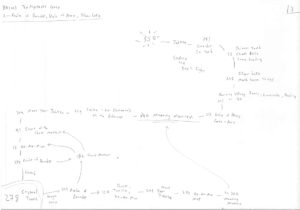 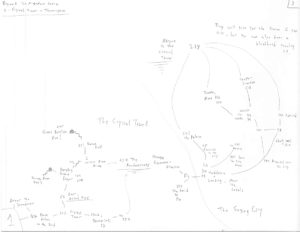