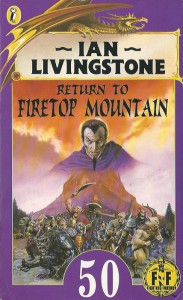 YOU become the hero of Anvil again. Ten years ago some troublemaking adventurer killed Zagor, the Warlock of Firetop Mountain. But as wizards do, he’s coming back to life… and he’s raiding the town of Anvil for unwilling organ donors to build his new body.

So grab your sword and lantern, leave the Provisions behind. It’s time to head back to Firetop Mountain to teach Zagor that coming back from the dead is not okay.

I didn’t think this one was at all good. It had about the same charm and complexity as Midnight Rogue, which really isn’t saying a lot.

The dungeon is a straight line, except for one fork early on which bypasses required mission items. The road trip part was better; it had a fork, and had more variation than “on your right is a door, open it or keep walking?”… well, a little more variation.

The repeated use of a tiny book and the magnifying glass, which are required to activate the Elemental teeth, felt uninspired and repetitive; even the buggy one in Island of the Undead had some hands-on problem-solving.

In the big boss fight, the Elementals that are your help, are four page numbers to be turned in sequence; effective, but uninspired. And his personal guards are insta-kills unless you have some random loot item from back on page 1. Yes, that’s typical, but after 50 books we deserve better. 🙂

And lastly is just the fight grinds. Zagor has a Skill of 11, and even getting that far has some mandatory Skill checks. With a few exceptions, you need to fight every critter you see. And there are no Provisions, only a couple of healings in the dungeon. So if you have a Skill under 11 you’re basically wasting your time, except for early recon and mapping missions.

It wasn’t an awful book. It was longer than Midnight Rogue, and had fewer critical bugs than Island of the Undead. But ultimately, you are presented with a linear set of doors, and must visit/fight almost every single one, to be faced with a vanilla Skill 11 boss fight. Compared to some real gems like Sword of the Samurai, Return to Firetop Mountain was mediocre. 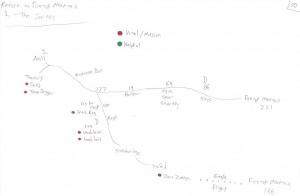 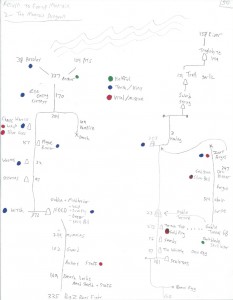