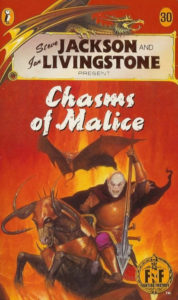 YOU become the last descendant of the king who founded this kingdom.

A bajillion years ago (as it always is) the king’s evil brother and his seven lieutenants were banished to the underground cities to live with dark elves and blind cave people. A magic shield keeps this imprisonment in effect, and also brings good luck and prosperity to the kingdom.

Yeah, it’s pretty derivative. It’s a combination of the magic sword in Sword of the Samurai or that crown in Sorcery! or a half-dozen other stories where an entire kingdom is addicted to magical good luck instead of regular life like the rest of us poor schmucks, with the usual “they were banished but the spell is wearing off” thing.

The shield has been stolen, and now the evil baddies are amassing an army… yeah, okay, you’ve heard this before. No surprises here, and the story really doesn’t make a lot of sense.

Just go with it, pack your 5 lunches and magic cat, and turn to page 1.

There have been a few FF books that I’ve not enjoyed thoroughly. But Chasms of Malice beats them all, and goes to the bottom of the stack.

Well, to start with, the story is so very basic and derivative that it’s laughable. The kingdom’s magic good luck charm is missing, the magic seal that keeps that ancient evil at bay has been broken, and we let the bad guy build an army for a thousand years and suddenly we’re in a hurry,… So that’s the three most overused McGuffins brought together in one story.

The writing itself is stilted and unnatural, e.g. “her name is X and she is a warrior and you are amazed at her skill” and “you see an arrow hit her and she falls down.” The descriptions of the world around you lack atmosphere and any compelling detail, and what there is often doesn’t even make sense: walking through a marsh in this underground warren, or that I know the locals’ name for that sharp rock where I wrecked the raft. The transitions are abrupt and disconnected, as well: as you walk down a hall and hear screaming (though it doesn’t say from which direction), and on the next page you simply stop to eat and sleep, the screaming evidently forgotten; in another, a single paragraph describes trolls tormenting an orc so you fight the trolls and you leave back down the hall, all in one blur, and without another mention of the orc, not even a dismissive one where he runs away.

The book uses some of my least-favorite lazy game mechanics, too. There are numerous “roll two dice, if same then die” throughout, which ticked me off in Rebel Planet too. There is “One-Strike Combat” which is a simple 50/50 roll to see whether you live or die. Considering that there are spots with as many as five in a row of these, the chances of being killed by 50/50s is already 96% without even bothering with actual combat or narrative insta-deaths (about 10% of the book’s 400 entries are insta-deaths). I’m pretty sure that this book can’t really be won even with 12/24/12, simply due to one-strike and two-dice-match deaths.

Between being unplayable and also poorly written, I can’t say there’s a lot to love here.

Really, there are only a few things at all original or interesting here:

So, yeah… it’s really not a great book. In fact, I think it’s the worst FF I have played yet, because even Midnight Rogue and Legend of Zagor had believable layouts and transitions.

One-Strike Combats. What the hell? It’s a 50/50 and there are many of them. Even with 12/24/12 and every right decision, you still have a 63-in-64 chance of being killed just by these. Not to mention the numerous 1-in-6 “roll two dice, same = dead” which reduce the chances to an additional 40% of that 1/64th, even if you simply had an invulnerable character.

On 280 the trolls tell you how to cross the lava: right, left, diagonal left. This is incorrect: the correct path is right, diagonal left, left. Oops!

In at least one case you fight a Khuddam without a weapon. There are no rules for this in general nor on this page, so I guess you just fight as usual, same 2 damage on a hit and all? Strangely, a few pages later there’s a second Khuddam and this one has different stats if you don’t have your sword. Not sure what’s going on here… 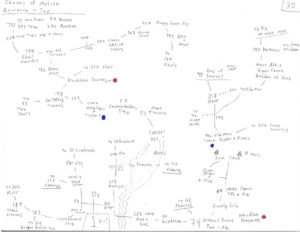 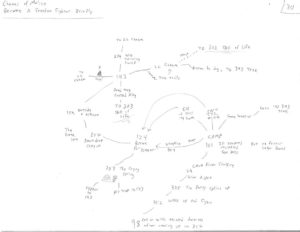 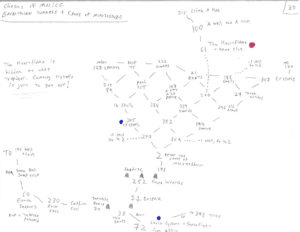 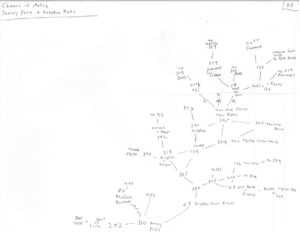 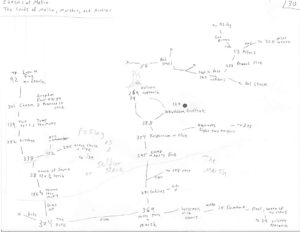 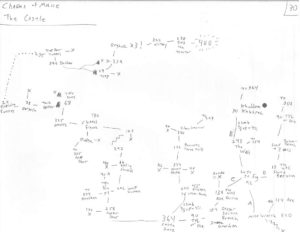 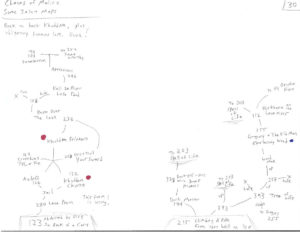 Book 30 in the series